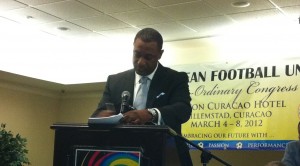 March 8, 2012 – Willemstad, CURACAO: Members of the Caribbean Football Union (CFU) met in Willemstad, Curacao, March 4 – 7, 2012 with a unified vision. The theme for the three day Extra-Ordinary Congress was ‘Embracing our future with purpose, passion and performance’, and the meeting was an extraordinary success on all counts.

The official welcome was received from gracious host, Rignaal “Jean” Francisca, President of the Federashon Futbol Korsou, and included greetings and an address from the Honorable Lionel Jansen, Minister of Education, Science, Culture and Sports, Curacao. However, it was the feature address by Jeffrey Webb, Chairman of CFU Normalisation Committee and President of the Cayman Islands Football Association (CIFA), that was received with energetic applause demonstrating early, the solidarity of the CFU.

The three day programme was extensive and included a delegation from FIFA, supporting the initiative and providing one-on-one development sessions with each member association. The CFU Extra-Ordinary Congress Programme also included meetings of the Legal, Football and Finance Committees. However, the most significant item on the agenda was the review and approval of the new CFU Statutes.

The Legal Committee worked diligently over the past two months to develop a comprehensive draft of CFU Statutes and collaborated with the member associations ensured that CFU members were involved in the review process, prior to arriving in Curacao.

A thirty page semi-final draft Statutes was presented at the Extra-Ordinary Congress, which was reviewed to allow member associations a final opportunity to contribute, share concerns or provide alternate wording, until the document was adopted and approved in its entirety.