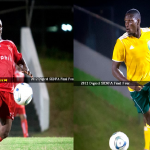 Amazing?Fantastic? Marvelous? The word to describe the last two decisive games for the final Final Four game is probably indescribable. In the first game Delphic Newtown United came up against UDC Garden Hotspurs. Spurs had not won any Final Four Payoff matches and were looking to go out with a bang as they had no way of making it to the finals.

In the first half of the game Newtown looked quite lackadaisical and it was apparent that they were becoming complacent and allowed Spurs ample opportunities to score. Spurs however, was not taking humiliation lightly and the took the opportunity to score. Finally, Spurs had scored a goal for the Final Four Playoffs.

It didn’t take Newtown long to equalize and as the ball was reset and played again, the whistle blew for halftime. Newtown were fully aware that they only needed a draw to advance to the Finals a that is just what they play for.

An entire half elapsed without another goal scoring and Delphic Newtown United could pronounce themselves finalists.

The first game made the second game even more interesting as S.L.Horsford St. Pauls had to win to advance, while Conaree could advance with a draw.

A massive crowd gathered to witness this amazing show of talent, passion, love, commitment and hunger for gold. In the beginning it was Conaree who was having the most chances to score. It was St. Paul’s Josh Leader who was able to capitalize on his opportunity when his teammate Javeim Blanchette earned the team a penalty.

St. Pauls definitely had the finals within their sights. Late in the second half, the seventy-first(71st) minute to be exact, Conaree earned themselves a penalty. Errol O’loughlin did not let this chance go to waste. The game was now level and Conaree were now in a position to advance to the SKNFA Final Four Playoffs

Some fifteen minutes later, Conaree saled the deal when Kervin”Infamus” Benjamin scored his second consecutive goal for two playoff matches. The crowd held a mixture of feelings and a personalities which reminded everyone of just how beautiful this game is.

It is official, The SKNFA Playoff Finals will be played between Delphic Newtown United and Conaree FC. The question now is:Can Coaree go all the wayy and make history once more by winning the cup”?