The Round II points decide which four teams move on to the Easter Cup and the overall points determine the Final Four teams to play for the championship. The standings at the end of Round II are: 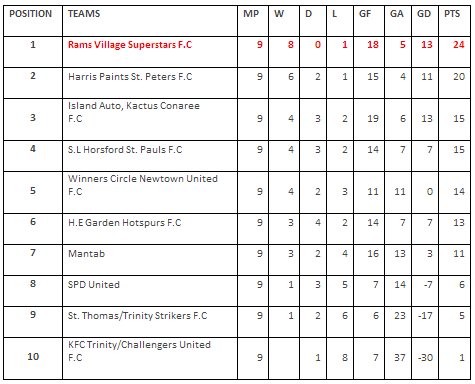 The top four teams of the round have qualified for the 2014 SKNFA Easter Cup as follows:

Easter Cup defending champions S.L Horsford St. Pauls has once again qualified for the cup. Will they be able to defend their title?

With only one round to go before the SKNFA Final Four, the fight for the top has intensified.

The table below shows the overall points to date for all the teams of the Premier Division. Who will be the four teams to qualify for this year’s Final Four?

The Premier Division Round III commences on Thursday 27th March at Warner Park.