Basseterre, St. Kitts- Each team fights throughout the season for a shot at becoming a Final Four contender, but that accomplishment is only the beginning of the game. Now that the four teams have been named the real game begins. Level One began on Saturday 17th May when S. L. Horsford St. Pauls United came up against Hobson Enterprises Garden Hotspurs. 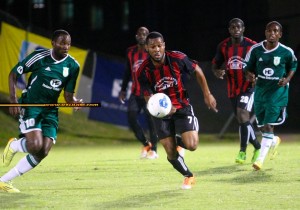 Although both teams had faced off numerous times in the qualifying stages, this was a completely different ball game and all teams held the right to bear arms.

Right away the teams brought out their big guns. Balls flew from heads, feet and in the goalkeepers’ case, hands. Zelon Morton of Hobson Enterprise Garden Hotspurs was kept incredibly busy as St. Pauls noticeably fired from all angles toward their home base. Spurs’ defense mechanisms took a beating but held up at the end of the day as both teams agreed to call it a truce and ended the fight in a draw. Though still in the early stages of the battle Daniel Rouse (Spurs), Darren Caines (St. Pauls) and Sheldon Lawrence (Spurs) have received warnings from the referee and must be careful if they wish to play throughout the remainder of the tournament.S L Horsford St. Pauls and Hobson Enterprise Garden Hotpsurs now each hold one point.

One day later Warner Park came alive once again with action as Rams Village Superstars took on Harris Paint St. Peters. Once again shots came from both bases. At halftime, neither of the teams had drawn first blood until St. Peters accidentally opened fire on themselves, resulting in an own goal. Less than twenty minutes later Alister “Poodle” Warner added insult to St. Peters’ injuries as he secured Village’s victory. 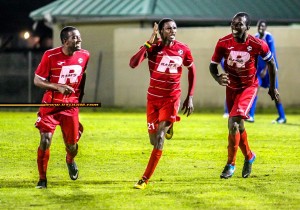 Action continues on Wednesday 21st May at 8:00 p.m where S L Horsford St. Pauls will face off against Harris Paint St. Peters.