Last night’s SKNFA Premier League matches proved to be an indication that the unexpected is to be expected for the remainder of the round. One of our giants, Conaree F.C came up against one of the league dwarves, Cayon F.C. Of course Conaree was the chosen favourites as they had already amassed over three times the amount of points Cayon accumulated over the past few rounds.

Like David, Cayon stood their ground and held steadfast and seemed determined to not be bullied into submission. It was evident that they came out willing to leave their hearts on the field and onlookers were thrust into awe as Cayon F.C threw the first punch, A goal off the boot of Kurt Morton.

Goliath was not about to let David humiliate him, and Mudassa Howe took charge for his team and landed a painful blow to tie the game. Both Teams fought hard back and forth but there was not enough time in this battle for either to capitalize and declare themselves the winner.
[/caption]

The Second fight was a “clash of the Titans”. A never Ending Rivalry between The boys from the West and those from the East, Delphic versus S.L.Horsford’s. St. Pauls came out strong and beat the goalkeeper twice in five minutes but failed to beat the very last defender, the cross bar, which denied both shots. Newtown then came back determined not to let the league leaders get away and Shashi Isaac scored a beautiful volley.

S.L.Horsford’s St. Pauls came back with a vengeance and Javeim Blanchette tucked the ball in the side pocket of the net with his head. Shortly after, the whistle blew for the first half to end. When the second half begun, S.L.Horsford’s seemed to be taking advantage of the fact that Delphic Newtown’s coach had been asked to leave the bench. They didnt cease attacking and two more goals came courtesy Joash Leader and Terrance Warde. 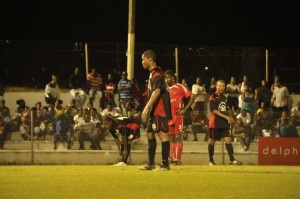 This battle was called to an end by the referee and S.L.Horsford’s St. Pauls raised their swords to a well deserved victory. The wounded Delphic Newtown United left the field as the victors celebrated their victory. The next event to look at is the SKNFA’s Easter Cup 2012-2013 beginning this coming Saturday and continuing through to Sunday. 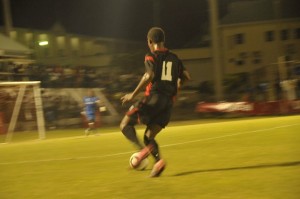