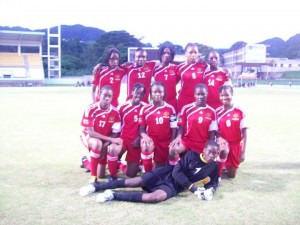 The SKNFA continues to develop football in St. Kitts-Nevis. The Association has been putting efforts into strengthening national teams, grassroots kids, and youths on a whole. The attention is now being turned toward females! One of Joseph Sepp Blatter, FIFA President’s most famous quotes is “The future of football is feminine”.

Females proved that they can be just as competitive as males in the 2011 FIFA’s Female World Cup where the performances of the players were undoubtedly exceptional. The Final match was really one for the books! Last years, our very own Kittitian and Nevisian female ‘soldiers’ faced up to other teams in the U-20 and U-17 Olympic Qualifiers. Although our teams were not victorious in any of their matches, they held their ground on the battlefield and should be commended.

Now, the SKNFA is calling on all females from age thirteen (13) and above who are interested in playing in the SKNFA’s Female League to register their names at the SKNFA on Lozack Road. This project promises to be an interesting one, as our females attempt to become more competitive on the world stage. For more information please contact the St. Kitts- Nevis Football Association at tel: 869466-8502 or email info@sknfa.com.