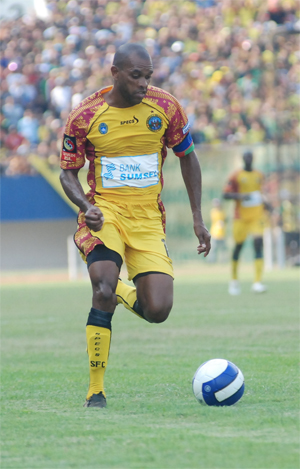 It was another action packed round of football in the ISL (Indonesian Super League) on Wednesday 9th December.

The venue for the clash between Sriwijaya FC (SFC) and visitors Persela Lamongan, was the Gelora Sriwijaya Jakabaring stadium in Palembang (South), on the Island of Sumatera and the home base of the SFC.

As was anticipated, the stadium was filled to capacity with 40,000 supporters, and the atmosphere was great for a night of decent football. Most were hoping to see the home team walking away with another easy win and a flood of goals. That wasn’t to be the case as the visitors proved to be a very formidable force.

The first half started with the hosts Sriwijaya FC taking early charge and creating countless chances, but to the disappointment and dismay of the supporters they failed to turn those opportunities into goals. Lamongan came out with an unusual set up and adapted a very defensive system with the hope of frustrating the hosts SFC and further relying on counter attacks.

That seemed to have been a very good plot by the away team as the first half ended 0-0.

It was the perfect respite for the coaching staff and players of Sriwijaya FC. Whatever was said at half time in the changing room, the hosts came out with boots blazing and got the opening goal in the 52nd minute through the ever ready, ever green 37 year old St. Kitts and Nevis striker and captain Keith “Kayamba” Gumbs.

The celebrations around the stadium were however shortlived, as some sloppy defending lead to the equalizer in the 62nd minute for the visitors.

The score remained deadlocked at 1-1 and it was the visitors Persela Lamongan who came closest to taking the lead in the 87th minute, but that wasn’t to be as their foreign striker only managed to kick the ball on the cross bar.

This was some relief for Sriwijaya FC and when it seemed as if the game would have ended in a stalemate at 1-1, up steps Keith “Kayamba” Gumbs again, this time carving a goal from nothing to grab the winner and his brace (2 goals) in the 90th minute.

It was a sign of joy and pandemonium around the stadium as the fans threw bottles and papers onto the pitch (field). The game ended 2-1 and has seen Sriwijaya FC maintaining their hot streak with three (3) wins in the last three (3) matches.

The win moved the Sumatera based outfit to 3rd on the standings after eight (8) rounds of matches with two (2) games in hand.