Brittney Duggins etched her name in SKNFA history when she captured the Miss SKNFA Sports Personality crown on 23rd June, 2012. In a pageant that was anything but one sided, all contestants had an equal shot at making history.

The segments in which the participants partook in were as follows: Promotional speech, Creative Wear, Performing Talent Evening Wear and Onstage Interview. 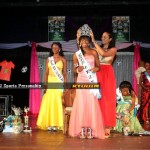 The judges had to come to an unconventional decision to scrap the interview segment due to an unfortunate misunderstanding in the questioning procedure and criteria. When all was said and done, Brittney Duggins was announced Miss SKNFA Sport personality, 1st Runner-up was Anthea Morris and 2nd Runner-up Shiwani Gumbs. Other contestants were Tricilla Arturton representing C.C.C Bath United FC and Kendresha Wattley representing S.Lhorsford St. Pauls.

The SKNFA wishes to thank everyone for the support that we have received. We are humbled by our sponsors and fans and are very grateful for your assistance. To all that helped in making the show a success, we say thank you.