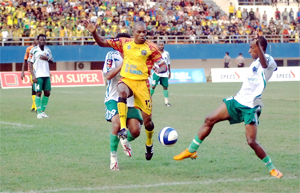 Sriwijaya FC (SFC), the Indonesian Club that is being captained by Kittitian Keith “Kayamba” Gumbs, was held to a 1-1 draw at home vs Persib Bandung.

In one (1) of two (2) Indonesia Super League matches played yesterday Saturday 12th December, Kayamba and his Sumatera based team were hoping to keep their hot winning streak going when they came up against Persib.

The game kicked off at 7pm and was carried live on local television stations. This meant that, many spectators who would normally come to the stadium, stayed on their sofas and enjoyed the game in the comfort of their homes. Nonetheless, it was still a great atmosphere at the Gelora Sriwijaya Stadium as the over 20,000 fans cheered the home boys.

SFC started the sharper of both teams and as seemed to be the norm, created many great scoring opportunities. It was just inside ten (10) minutes when we thought it would be the opening goal from SFC’s Nigerian striker Obiora who made a meal of the chance. Not long after local striker Rachmat Rivai had another great opportunity to give SFC the lead, however, he shot straight to the Bandung goalkeeper.

It was a very well disciplined Persib Bandung team. They sat back, absorbed the pressure from SFC and relied only on counter attacks. The Sriwijaya goalkeeper was virtually a spectator in the first 45 minutes. 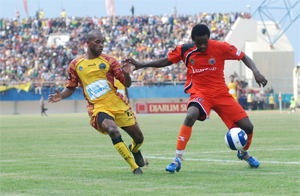 The second half wasn’t much different from the first as Sriwijaya pressed tirelessly to find that elusive opening goal. Persib Bandung remained disciplined and was proving a very formidable force.

In the 50th minute coach of SFC, Rahmad Darmawan started freshening up things. He replaced striker Rivai with Oktavanius, pushing Kayamba into his preferred striking role from the left of midfield. This move seemed to ruffle the Bandung defenders a bit, as SFC began enjoying more possession.

The move finally paid dividends when Captain Kayamba Gumbs, St. Kitts and Nevis’ international met Obiora’s cross with a glancing header to open the scoring in the 69th minute. The game was crying out for a goal and it was also a wake-up call for Bandung who had to change their strategy.

Doing this meant that the game would be a more open and attacking encounter. They did and it seemed to be the right medicine, as they carved out few chances of their own.

Kayamba’s Club tried desperately to hang on for the win, but Persib did spoil the party when Brazilian defender Martin Renee scored a header in 89th minute. The game ended 1-1 which leaves SFC in 3rd place six (6) points behind the leaders with one (1) game in hand.

The next fixtures for SFC are: