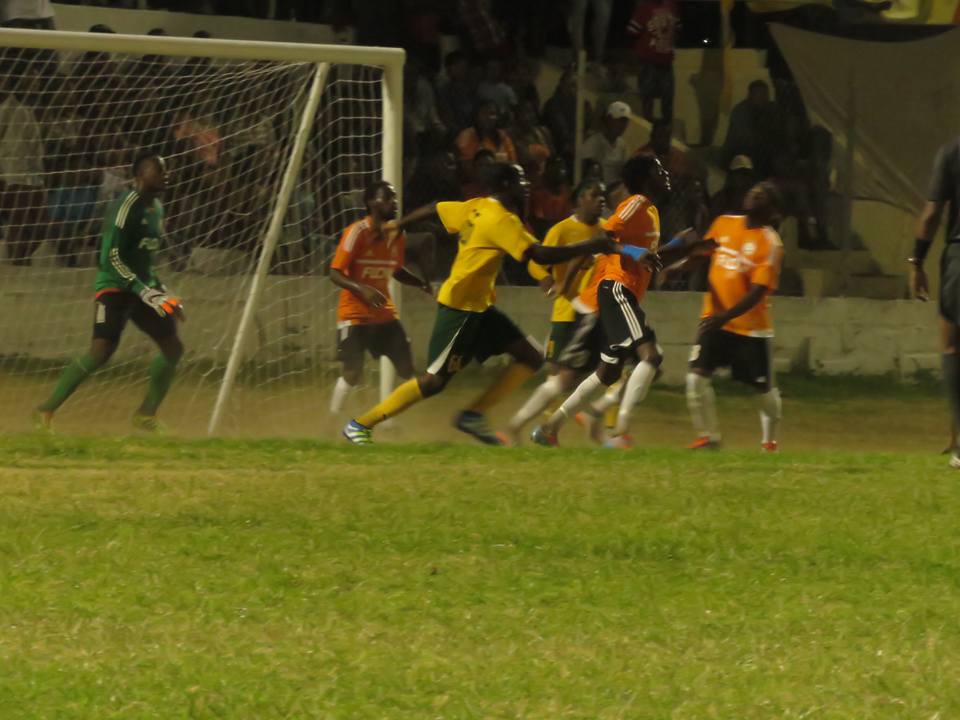 Cayon’s Javiem Blanchette scored the winner in the first half sending the Cayon fans into a frenzy in what was a hotly contested encounter. The win means a game 3 in the Best of Three series will be played on Friday night with the winner crowned the 2015-2016 Premier League champions.

The second half was very tense as the physical play of both teams riled up fans and players alike. The Conaree players seemed perturbed by what they deemed non-calls by the referee and allowed the frustration to get the better of them. In the end good goalkeeping and tenacious defending gave Cayon the upper hand, though they had chances to extend their lead towards the dying moment of the game.

Coach George ‘Yellowman’ Isaac said he did not do much adjustment to his team after losing game one, but rather urged his team to remain focused. “We ain’t do nothing much we just have to stay focused right throughout the game,” he said. He was pleased with the manner in which his team played and commended them for their effort in forcing a game 3.

Coach Isaac continued, “I think the performance was OK. I really love it from beginning to end… Conaree is a good team, and we had to play hard to get the win, and we deserved it.”

Meanwhile, Coach Alexis Morris of Sol/Island Auto Conaree F.C. acknowledged that his team allowed the frustrations of the match to get the better of them. “Over and over we try to tell them that they have to remain committed to the task; they need to remain disciplined to the task no matter what. And at no time at all you should allow officiating to get to you, because at the end of the day, the book supports the referee. The referee is in charge. The referee’s decision is final, so all we need to do is recuperate.”

He credited Cayon for playing well and said Conaree will just have to regroup and come ready for game 3. He also noted that though his squad is very experienced in the finals, having reached there four times and winning a title in the process, he will not take it for granted this will help his team.

“You could be in the final 10, 15, 20 times before. That to me doesn’t really mean much on the day. The football is played on the day,” Coach Morris said.