Basseterre, St. Kitts- After over one round of intense football, LIME 4G Cayon F.c is on a quest to prove they belong in the Premier League. A newly promoted Cayon F.C is currently dominating the second round of competition and as a result will go into the Easter Cup as first seed. 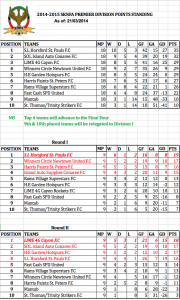 SOL Island Auto Conaree, H E Garden Hotspurs and S L Horsford St. Pauls are the other three contenders hoping to capture the Easter Cup. The Games are scheduled to take place on 10th and 11th April at Warner Park.

The first match will feature Conaree and Spurs as they qualified in second and third place respectively. The second match will feature Cayon and St. Pauls. On the 11th, the two winning teams will do battle for the Easter Cup title. Matches begin at 6:00 p.m and 8:00 p.m on each day.