(Source: CFU)Kingston, Jamaica, October 14, 2013: All is set for the staging of the Final round of the Caribbean Football Union (CFU) Women’s Under-20 Tournament, which is scheduled for October 18-27, at The Anthony Spaulding Sports Complex and the Waterhouse Mini Stadium.
Cuba, Trinidad & Tobago, Anguilla and Grenada and will play all their games at the Waterhouse Mini Stadium in Drewsland, as the teams in Group A, while the teams in Group “B” are Jamaica, Dominican Republic, St. Kitts/Nevis and Suriname. They will play their games at the Anthony Spaulding Sports Complex in Arnett Gardens.
Twelve games will be played at the preliminary stage, followed by the semi-final matches on October 25, and the third place play-off and Final on Sunday, October 27. The finalists will advance to the CONCACAF Finals scheduled for January 2014 in the Cayman Islands.
The Group stage of the Tournament kicked off on July 7 and ended on July 27. The Tournament was divided into four Groups and the two top teams from each group automatically qualified for the Final round.
In Group One, which was held in the Dominican Republic, Trinidad & Tobago topped the table with six points, Dominican Republic got three points while Aruba did not make it onto the score board. Thirteen (13) goals were scored in Group One action, with Yaqueisi Nunez of the Dominican Republic topping the scoring charts with four goals.
Group Two was staged in the British Virgin Islands. Anguilla emerged from that category with nine points, St. Kitts and Nevis with six, while Antigua and Barbuda failed to qualify after gaining only three points.
Twenty-five (25) goals were scored by the players in this Group, with Britney Lawrence of St. Kitts/Nevis being the top scorer with five goals.
In Group Three, it was the host team, Suriname, which dominated with the maximum nine points from three matches. Grenada finished second in the Group with six points, while Dominica obtained three and St. Vincent and the Grenadines, none. This Group produced twenty-two (22) goals, with three players sharing the top goal-scoring honours with three (3) each: Dominica’s Kasika Samuel, Grenada’s Cherese Hood and Suriname’s Andaya Lantveld.
In Group Four, the quartet of teams on display was host Jamaica, Cuba, Bermuda and Curacao. However, the fancied Jamaicans had to dig deep in the last match of the Group on July 27, and come from behind to get past rivals Cuba 2-1, to top the standings.
Jamaica finished on maximum nine points from three games, while Cuba placed second with six points. The Bermudian team was placed third, after securing their only victory with a 3-0 triumph over the winless Curacao. Thirty-one (31) goals were scored in this Group, with Jamaica’s Oshay Lewis at the apex of the scoring chart with six (6) goals.
91 goals were scored by players at the Group stage of this Tournament. The eight teams in this Final round scored 77 goals of that number.
Please see fixture below: 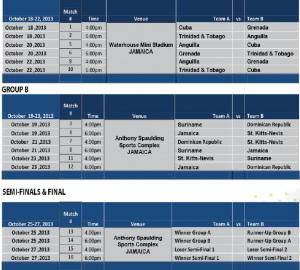