As the awareness of this little island nestled within the Caribbean grows, so does the interest in our soccer players and teams on a whole. Coach Judan Ali visited St. Kitts-Nevis and the U-17 & U-20 and Senior Men’s National Teams’ staff and players were given the privilege of training under his supervision for ten days. 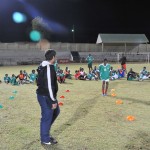 Judan Ali is world renowned for his drive and his goal of taking a country that is ranked over 70th position in the FIFA/Coca-Cola Rank to a FIFA World Cup Final. In 2005, Judan Alis Indian Under 15s Won Arsenal Soccer International. Ali has quite the track record in England and is famous for his fight against prejudice because of his Asian background.

It has been said that Ali hopes to become the EPL’s first British Asian coach after his international quest. His expertise were utilized when the national U-17 & U-20 and Senior squad held training sessions at the Warner Park Football Stadium over a period of ten days. In speaking with him, he revealed that he has spotted many talented players and wished to work with many of them in the future.

The St. Kitts- Nevis U-17 & U-20 national teams are both training for their upcoming World Cup Qualifiers 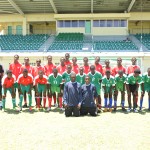