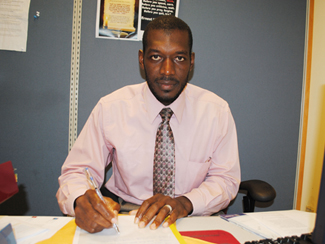 Great news keeps flooding us as we take the time to congratulate yet another member of our football fraternity, Mr. Shavon Douglas more affectionately known to us as “Fabby”. The SKNFA nominated Mr. Douglas to attend the Semmelweis University.

Douglas has been a member of our coaching fraternity for many years and is a holder of BA in Economics/Finance, Post Grad. Cert. in Project Management, NYSE National D License, SKNFA D License and Certification from the Germany FA.

In September 2011 he was appointed assistant coach of the St.Kitts-Nevis National U-23 Olympic team alongside Jeffrey Hazel. The team qualified at the top of the group and advanced to the second round of the 2012 FIFA Olympic Qualifiers Competition.

In November 2011, Douglas was appointed assistant coach of the National U-23 team for the second round of Olympic Competition. Although the team did not advance to the next round, he was instrumental in the building of our youth not only as players, but as individuals.

In 2012 Fabby was chosen to assist Lester Morris in preparing the U-20 team for National U-20 team for World Cup Qualifiers. The team traveled to the Dominican Republic to compete but were unsuccessful in their endeavors.

In 2012 Fabby was selected once more to assist his colleague Jeffrey Hazel on a journey to the 2014 World Cup Qualifiers.

The SKNFA congratulates Mr. Shavon Douglas and wishes him well in this coaching endeavor. You may recall in 2010, the SKNFA successfully nominated Anthony Isaac for the field of General Conditioning. Mr. Douglas’ area of study will be specific to football coaching. Previous football coaching scholarships to Semmelweis University in Hungary included John Gumbs (1997), and Andy Blanchette in 2004. The SKNFA has also benefited from other Semmelweis scholarship winners including Hance Richards (2008) and Judith Isles (2007) both of whom have worked with our senior and junior teams.