The Fans were treated to one of the most exciting championship in St Kitts and Nevis Football. Coury Gatorade Conaree and S L Horsford St Pauls did not disappoint the fans at the Newtown Playing field on Sunday 19th December for the first ever Sugar Mas Cup.

The Championship match began with both teams pressing forward to show their dominance and claim the first goal and the Sugar Mas Championship. Although both teams had many attempts at goal both teams were unable to score any goals in regulation time. The game then went to 30 minutes of extra time and this also saw the defenders of both teams denying any shots to goal. Once again at the end of the 30 minutes the game remained scoreless.

According to the rules and regulations the game would be decided on penalty kicks. The players would have to out think the goal keeper to score their goals. S L Horsford St Pauls started what would turn out to be a penalty kick showdown. Each team was determined to score every goal as one by one each team scored their goals. The first goal that was denied was the shot by Marvin Charles of Conaree. St Pauls was now in a good position to go ahead on goals. Crios Freeman of St Pauls missed his shot to goal putting his team back on par with Conaree. 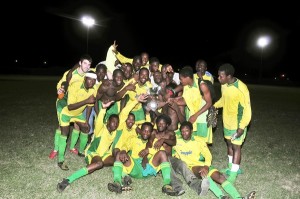 After the end of the five allotted penalty kick both teams were still tied at four goals with each team missing one goal. The winner would now be determined by sudden death as the first team to miss a goal gives the other team an opportunity to win the game. One by one the player of each teams scored each goal. St Paul was the first team to miss the first penalty in the sudden death which gave Conaree the opportunity to win. All eleven players on each team had an opportunity to kick a penalty which has never been seen before in football in St Kitts and Nevis. The final penalty kick of the night was that of the goal keeper Delroy Delaney of Coury Gatorade Conaree, he would determine whether they win or they would have to flip a coin for a winner. Delroy was confident to win the game for his team as he placed the ball in the back of the net beating the goal keeper from St Pauls. The final score of the historic evening was Coury Gatorade Conaree nine (9) SL Horsfords St Pauls eight (8).

The earlier match of the day was Newtown United vs. St Peters and Newtown won the game 5-1 for third place.

The historic Sugar Mas Championship ended with a presentation of Trophy and Plaques to the winner and participants by President of the SKNFA Anthony Johnson, General Secretary Stanley Jacobs and Marketing Manager Andrea Liburd. The fans were then entertained by the recently crowned Beaumont Park Soca Monarch King Konris who got the crowd jumping with his winning song Unstoppable Force. They were also entertainment by Best of the Rest Monarch LaLa, soca monarch contender, Soca Samuel and the Small Axe Band.