Team Cuba emerged top of the Group 1 table after defeating Team St. Kitts & Nevis in the final match, at Warner Park, in the CFU Caribbean under-17 men’s qualifiers.

Cuba defeated St. Kitts and Nevis 5-0 in a game keenly contested, but one in which it was clear that Cuba had the superior skills. With greater ball possession, Team Cuba was able to build their plays and create more goal scoring opportunities. 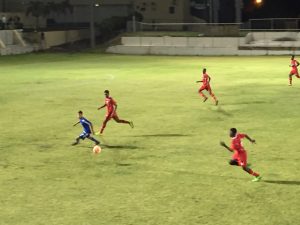 Within 20 minutes of the first half, Cuba had stamped its dominance on the match at 3-0 going into half time. Ribaldo Roldan of Team Cuba scored in the 6th and 20th minute of play, while Yandry Romero scored in the 8th minute. Ronaldo Rosette scored in the 89th minute. An unfortunate self-scoring goal by Shermar Douglas of Team St. Kitts & Nevis in the 80th minute provided Cuba with the overall tally of five goals.

Team St. Kitts played hard right to the very end in a performance that was not short of effort, and attempts to score. Crowd support was evident, though not as loud as the Cuban supporters. In any event, it was a night of entertaining football.

Commenting on the Group 1 tournament after the match, SKNFA General Secretary Stanley Jacobs said, “In terms of the organization, we are quite pleased. We were able to successfully organize this group stage of the CFU Caribbean Under-17 men’s Competition. It is never an easy task to organize these tournaments. It takes quite a bit of effort in terms of the logistics, the finances and making sure everything is in place. From the organizational aspect, we believe everything went well. It was a successful Group 1 competition.”

He extended congratulations to Team Cuba, which is now advancing to the next stage of the tournament. He stated, “Team Cuba has shown it is the superior team in this group.”

General Secretary Jacobs also congratulated Team St. Kitts & Nevis. He said, “I commend the team. The youths gave it their all, gave it their best. They came up short, but at the end of the day, they represented St. Kitts and Nevis very well.”

Looking ahead, Jacobs perceived the need to strengthen the youth program. He said, “We will look at our youth development program and how we can enhance it. We believe there is room for improvement. We’ll reinvest in the program and see how we can bring the improvements, at the grass-root level into the youth level. We are seeing tremendous success at the Under-20 and the senior level, so we have to ensure the youth program is solid, if we what that success to continue at the senior level. There is some work to be done in that area.”

In the final game of the Group 1 matches, Yellow Cards were issued to four St. Kitts and Nevis players in the 35th, 43rd, 65th and 87 minute of play.

The game was officiated by William Anderson of Puerto Rico, Keble Williams of Jamaica, Kuann Budd of Grenada and Karl Tyrell of Jamaica.

At the end of the Group 1 matches in St. Kitts, the results are as follows: