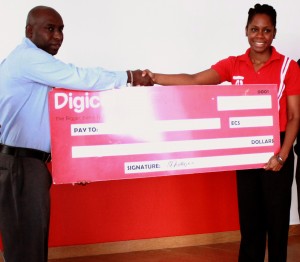 Basseterre, St. Kitts- 15th April, 2013- Digicel’s generosity toward the SKNFA is absolutely unmatched. Management and staff of the SKNFA today attended a ceremony at the Digicel Headquarters where the partnership was officially renewed.

Digicel has in the past been a longstanding partner of the SKNFA and today’s ceremony proved the strength of the SKNFA-Digi relationship. In a brief address, Digicel’s Jeanille Osbourne expressed her pleasure in being in attendance. At the moment Digicel is spearheading the Digicel Kickstart Clinic in St. Kitts-Nevis beginning on 30th April, 2013 where coaches of the Chelsea Football Fraternity will give some of our youth the opportunity to grow. General Secretary of the SKNFA Mr. Stanley Jacobs stated just how much the SKNFA appreciates the contribution to our youth. He thanked Digicel for affording our young men the opportunity to experience a different level of exposure. Osbourne further explained that the Clinic will be extended to local coaches as well, this again is testament to Digicel’s continuous generosity.

Digicel’s Kenneth Bobb, also in attendance revealed that the “Bigger Better Network” is also sponsoring the third annual Business League. The SKNFA has not only loaned its support to Digicel for both Business Leagues, but has registered teams to participate and were the first winners of the said League. The last Business League was won by the Eastern Caribbean Central Bank.

Digicel then presented the SKNFA’s executive and staff with twelve(12) handsets to assist in the effective preparation of the various football leagues and programmes. This gestures was noticeably very much appreciated by the FA’s employees. 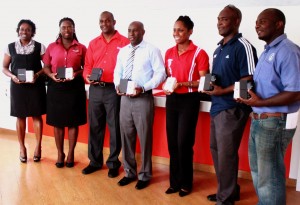 The final presentation of the day was that of a sixty thousand dollar (60,000) cheque to the SKNFA for the sponsorship of the SKNFA’s Digicel Premier League. Digicel has been the main sponsor of the top league on the island for the past six(6) years and continues to lend it’s hand toward the development of football on the islands. 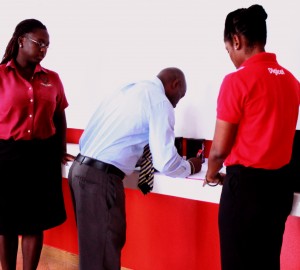 The representatives of Digicel articulated again just how pleased they were to present the tokens to the SKNFA. The SKNFA was greatly appreciative of the donations and expressed heartfelt thanks.

The SKNFA looks forward to a strong relationship with Digicel.