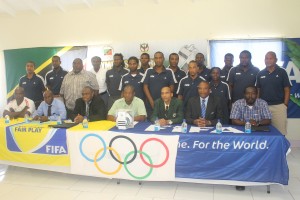 The SKNFA is once against hosting a coaching course to expand the knowledge and understanding of our most advanced coaches to date. On Friday 19th October, the SKNFA held the opening ceremony for the FIFA Olympic Solidarity Advanced coaching course where a total of fifteen(15) of the nation’s top coaches were in attendance and were eager to begin.

The opening ceremony featured the SKNFA’s president and general secretary Mr. Anthony Johnson and Mr. Stanley Jacobs. Also in attendance and seated at the head table were: FIFA instructor Mr. Rodrigo Kenton, acting Director of Sports Mr. Jeffrey Hazel who sat in for the Minister of Sports, secretary general of the SKNOC Glen Jeffers and the Master of Ceremonies Mr. Vernon Springer. 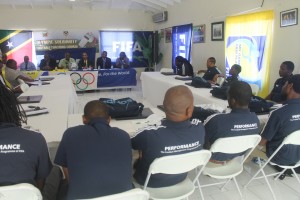 The coaches were urged to take this course and use it to their advantage. The were reminded that when it comes to the national program, there should be no bias as it related to clubs. Each coach in attendance have the basic criteria required to be a part of the course as they have all been through numerous coaching courses and sessions and have all excelled. They were reminded that they should all work hand in hand to fulfill the objectives that have been set not only by the FA but among themselves.

The course is scheduled to run from 19th -27th October.