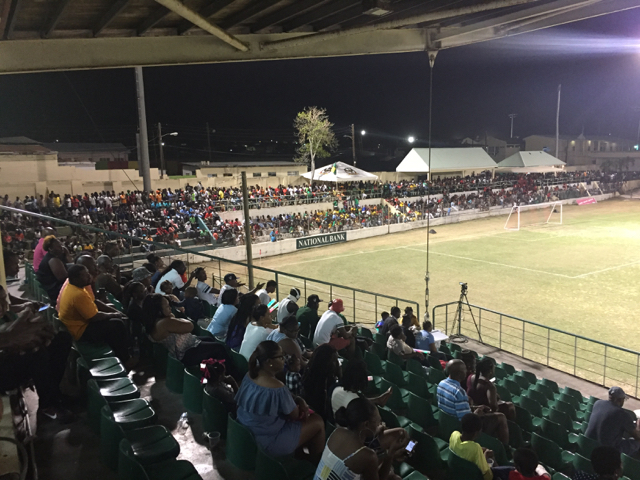 As the excitement of the Final Four competition spills into Wednesday’s encounter, President Anthony Johnson has commended the teams for playing the kind of football that is exciting for the fans.

Commenting on the level of spectator attendance, the SKNFA President said the Final Four 2016 kicked off at the Warner Park Football Stadium, and so far, the St. Kitts and Nevis Football Association (SKNFA) is quite pleased with the turnout at the games.

“I think the support was excellent for the first night. I think we have very passionate support; large turnout,” SKNFA President Anthony Johnson said, adding, “I believe that it augers well for the next set of matches on Wednesday night because the quality of play was, I think, very competitive.”

Defending champions St. Paul’s lost its opener against Conaree F.C. 3-2, and Cayon got the better of former champions Newtown F.C. 2-0. That result has put pressure on both St. Paul’s and Newtown to get a win, and both will be playing each other in their next encounter on Wednesday.

Johnson said, “All of the teams still have to work very hard. There is all to play for on Wednesday night. We expect Wednesday to be an even bigger night.”

In the Wednesday encounters, the stage is set to have two winners and two losers.

Commenting on the field that was being rested and repaired, the president said, “Well, it stood up well given that it was being played on for the first time in some weeks and given the difficulties that would have been encountered in trying to get the field back up to the surface that was required. It is still a work in progress.”

Meanwhile, the SKNFA president believes the success of the Final Four is down to hard work by both the association and the teams. “We at the SKNFA, we work very hard in terms of promoting the games and to ensure that our fans are comfortable and safe and feel a sense of belonging coming to the games,” President Johnson said.

The competition continues on Wednesday, 25th May, when SOL Island Auto Conaree comes up against FLOW 4G Cayon Rockets, at 6 pm, and at 8:30 pm, St. Paul’s United plays Newtown F.C., in what are expected to be a hugely tense and exciting encounters.