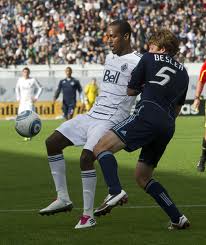 Almost a year after playing his last MLS game for the Vancouver Whitecaps, Atiba Harris reminded fans of what they’d been missing.

Harris, the 27-year-old from St. Kitts and Nevis, started up front in the Whitecaps’ scoreless tie with the Philadelphia Union on Saturday.

It was here, at PPL Park, where all his injury woes began in 2011, courtesy of a nasty tackle from Union centre back Carlos Valdes.

Harris played five games in total, scored twice and set up three more, before he shut it down for the season with a torn meniscus that required two surgeries.

He showed flashes of where he left off last year. His hold-up play, flick-ons, passing and physical presence were all valuable in a strong first half for the visitors.

Coach Martin Rennie brought on Long Tan for Harris in the 70th minute.

“I think around 10 minutes in I was like, ‘This is how it feels; I’ve got to get used to this again,'” said a winded but satisfied Harris.

“But I was anxious to get out there, excited, and once I got going, I felt good.”

It was almost a perfect start for Harris and the Whitecaps as he sprung Sebastien Le Toux with a well-angled pass just 15 minutes in.

Union goalkeeper Zac MacMath erased that chance with a good save, and Harris almost sent in Le Toux again, this time with a neat over-the-head pass.

In the second half, Harris twice went hard to the front of the goal, which is something the squad has been missing as well.

He looked close to drawing a penalty on a Y.P. Lee cross, then, on a second cross from Lee, crashed hard into MacMath, leaving both players down for a couple of minutes.

Before subbing off, Harris also picked up a yellow card for what looked like an elbow to the back of Valdes’s head.

“No, I wasn’t thinking about that, I was just trying to get the ball,” he said. “It wasn’t anything intentional.”

The return of Harris and veteran midfielder John Thorrington, gives the Caps a jolt of experience and added grit. It should give players like Davide Chiumiento more space to play in, though Saturday was another quiet night for the attack.

“It’s really important for us because he can keep all the balls,” Chiumiento said of having Harris back. “I think he can improve a lot because his fitness is not the best — he didn’t play for a long time.”

Rennie had used Harris on right wing through the preseason but there was a spot to fill at forward with Eric Hassli out with an ankle injury.

“He’s a good guy to have because he’s always putting people under pressure,” Rennie said. “That’s his first game, those guys need a bit of time, and once we get everyone back and together and clicking I’m confident it’s going to be more enjoyable for everyone.”