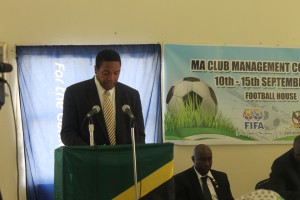 “If you stand still in football you’re going backwards” was the quote the honourable Glen Phillip used in his brief remarks at the SKNFA’s FIFA sponsored MA Club Management Course Opening Ceremony. In his speech, Minister Phillip praised all the sporting bodies of the island for their achievement in the past and encouraged the SKNFA to continue harnessing our available resources, marrying them with our ideas and objectives to achieve success.

General Secretary of the SKNFA, Mr. Stanley Jacobs handled the task of being the Master of Ceremonies and was very convincing in his brief remarks where he expressed his opinion that clubs with a properly structured organisation do considerably well on the field.

President of the SKNFA Mr. Anthony Johnson complimented Mr. Jacob’s point and highlighted that the persons in management and those behind the scenes contribute greatly to the performance of the players. He urged the persons present to operate their clubs as if they were operating a business. 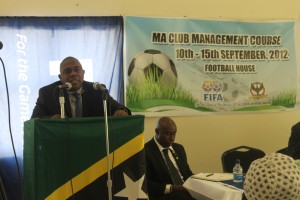 Also in attendance were representatives of the SKNOC Mr. Alphonso Bridgewater and Mr. Glen Jeffers who accepted praises on behalf of the NOC from the SKNFA for their continued support. Participants will be treated to six(6) days of information and interaction under the tutelage of FIFA Instructor Mr. Chris Colly who is visiting for his second time. 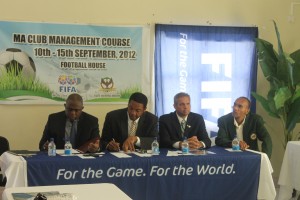 Members of the media were present at the Ceremony and were also thanked for their support to the SKNFA. Finally, everyone was reminded of the upcoming Caribbean Cup Group V to be held in October featuring St. Kitts & Nevis, Trinidad &Tobago, French Guiana and Anguilla scheduled for the Warner Park Stadium.