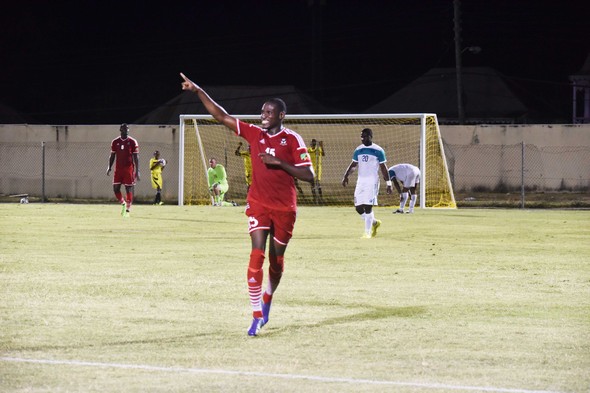 Basseterre, St. Kitts, 19th February 2016 – The St. Kitts–Nevis National Football Team intends to use the friendly international match against Bermuda this Sunday, February 21, to fine-tune its strategies in preparation for the prestigious CFU Caribbean Cup tournament that starts in March.

Coaches, players and administration are taking the Caribbean Cup tournament very seriously, and much preparation has been taking place over a period of months. The St. Kitts-Nevis Football Association President Anthony Johnson explains why the friendly international with Bermuda is so important.

“It is an extremely important game for the St. Kitts-Nevis National Team, because what we have found over the last few tournaments that we have entered is that the first game is always the game that our team performs not to its fullest potential,” said President Johnson, adding, “So what we are trying to do is to use this game as a sort of first game. We are preparing the team by having a warm-up game about a month or so before the actual tournament.”

According to the president, Bermuda is a “team of some worth”, and as a result, quality competition is expected in the match on Sunday. Coaches are also expected to use the match to identify areas of play that need attention.

The preparation of the St. Kitts-Nevis National Football team for the Caribbean Cup started with the two games played in Europe last year. Johnson stated, “We used the historic visit to Europe as a means of preparing our team for this tournament as well, preparing them under different conditions, under conditions that are far more strenuous, as far as the environment is concerned. The reports that we got back from the coaching staff were that the team did perform very well. We believe that the experience they would have gained in Europe would serve us very well in the upcoming Caribbean tournament.”

The match is expected to provide much excitement for football fans, who will have a chance to see their national team in competitive mode once more. Kick-off time will be 8 p.m. at the Warner Park Football Stadium.