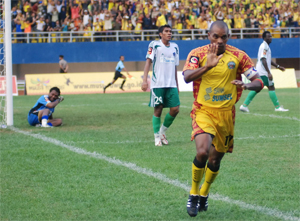 On Sunday 6th, December 2009 at the Gelora Sriwijaya Stadium in Jakabaring, home of Sriwijaya FC, sometimes known as the fortress, the home boys steam rolled the visitors Persijap 4-0. The stadium was near to it’s capacity as the almost 40,000 spectators braved the rain to support their team SCF or Laskar Wong Kito (The People’s Warriors).

The fans who packed the stadium cheered the hosts vociferously and that seemed to have injected some spirit into the players. SFC enjoyed most of the possession early on and found that elusive opening goal just after 33 minutes when St. Kitts and Nevis’ striker and captain Keith “Kayamba” Gumbs tapped home a cross from former Nigerian U23 international Obiora Richard, sending the fans in a frenzy.

The visitors, not wanting to be outclassed, tried desperately to carve out something of their own, but found themselves in despair. A swift combination on the edge of the box between Oktovianos and Kayamba resulted in a penalty kick for SFC. Captain Gumbs took responsibility to blast home the spot kick in the 37th minute to give the home side a 2-0 lead at the break.

At the start of the second half, the visitors came out with a little more hunger hoping to score an early goal which could bolster a come back. That had proven to be an illusion as the host continued where they left off and got the third (3rd) goal in the 53rd minute when Obiora slotted calmly past the Jepara keeper after some neat work from Liberian International Zah Rahan Krangar.

Even at this point when most teams would have probably given up hope of winning, the visitors still pressed forward hoping for that consolation goal. SFC with all advantages pointing in their direction, the fans support, home based and wet conditions wasn’t in the mood to concede. With one last hurrah, Keith “Kayamba” Gumbs scored again in the 87th minute completing his hat-trick.

He wanted to give the fans who had made the journey in rainy weathers extra motivation to come back on the 9th December when SFC takes on Persela Lamongan.

This was a complete team effort and a big confidence booster for SFC, leading up to their next game in mid-week. The win also moves the Sumatera based outfit from tenth (10th) place on the table to (6th) after seven (games).

“Selain itu kepada suporter tim kami”, dia lanjutkan. (“After that for the supporters of our team”, he continued).