(Source: dailymail.co.uk) Harry Panayiotou has scooped the Barclays Premier League Player of the Month award after impressing for an in-form Leicester City side in March.
The striker, 20, scored three goals, including those in impressive victories against Sunderland and reigning champions Chelsea, and has been chosen ahead of all the players in Division 1 and 2 based on his performance statistics.
Panayiotou also netted a hat-trick in his third game for St Kitts and Nevis on international duty, and is looking to make an impression under Nigel Pearson at the King Power Stadium.
Sportsmail held an exclusive Q&A with the forward after he found out about the accolade.

Congratulations, Harry. How would you describe your style of play at Leicester?
Hold up play, roll the defender. And I’ve got a good burst of acceleration!
Who do you look up to in the first team?
Jeff (Schlupp). I grew up with Jeff so to see him come through the youth ranks, he’s definitely my role model.
Do you train with them often?
I do, but not as much as I’d like to.
Your record at Leicester reads one game, one goal. How did that come about?
I was a first year and I scored 20 goals that season. They had nothing to play for [against Leeds] so they chucked me up there, and I came on and scored!
How often do you speak to Nigel Pearson?
Not too much this season, he’s a busy guy! But when he has a chance to come talk to me, he comes and talks to me. 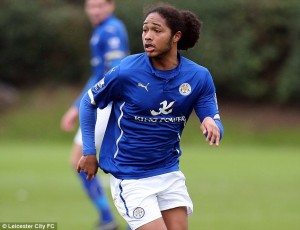 Is your goal to make it at Leicester next season, or go out on loan?
I’m Leicester born and bred and my goal is to make the first team, that’s all I’ve ever wanted to do, it’s not about going anywhere else to me. I’d love for us to stay in the Premier League, and I believe I can handle it.

How do you relax away from football?
Chill with my friends, I’m around some really good people.
On to that international hat-trick… how did you get to play for St Kitts?
My mum and grandma are from St Kitts, and my grandma passed away when I was younger – so making the choice to play for them came from the heart.
What was the reaction when you came back?
Everyone’s jealous when I go away (laughs), but they were still really happy. U21 manager Steve [Beaglehole] couldn’t stop looking at me for a week!
Where did you play, and what was it like?
Turks and Caicos. It was really hot! When you go to the Caribbean, you either have to train at 7am or at night time. The players in the Caribbean are much stronger and really quick, so you have to think quick – that’s all it is. Some of them aren’t the best players but they have certainly got a lot of strength so you’ve got to adapt to that.
Any St Kitts players you would tip to make it?
Romaine Sawyers from Walsall, he’s technically brilliant. I think he’ll get a move this summer because he’s really good. And our captain is doing great with FC Dallas in the MLS right now, Atiba Harris. There’s a few others from England, who could definitely be higher up but they just haven’t been seen.

Last album you listened to?
I went to the Nicki Minaj concert the other day [in Nottingham[ so has to be The Pink Print
Last film?
Fast and furious 7… emotional to be fair.
Last holiday (apart from your international break!)?
Egypt
A player you would tip to make it at Leicester?
Ben Chilwell (England U19 international)
Best advice you’ve received from a first team player?
I remember Andy King once speaking to me. He said when you come and make an impression, don’t worry about what anyone has to say and just make sure you’re seen. Keep working hard, going to the gym, keep practicing.
Best player you’ve ever played against?
Sammy Ameobi, he’s got great feet, we played him a tournament a couple of years ago. For how tall he is it’s actually amazing, and his finishing is on point!
What would you be doing if you weren’t a footballer?
I’ve always seen myself as a footballer. Nothing else. Maybe I’d be in the Caribbean, it’s just peaceful.

The award has been established to recognise the next generation of players coming through, coinciding with Barclays’ own work to encourage the next generation of fans, which will see thousands of tickets and unique football experiences given away via the Barclays Spirit of the Game website.
A winner will be selected every month for the rest of the season, as well as the Barclays Under 21 Premier League Player of the Season being unveiled in May.