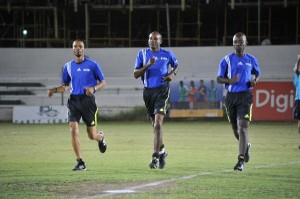 Mr. Innis has been on the FIFA international scene since 2010 and has had quite a few appointments recently including the CFU U-20 tournament in August.

Another local referee Graeme Browne has been appointed to officiate in the upcoming CFU U-20 World Cup Qualifiers Final Round in Jamaica. This tournament is slated to begin on 3rd November and ends on 19th November. Graeme has been on the international scene since 2006 and has had numerous appointments over the last six(6) years.

These two are testament to where hard work and dedication can get you.