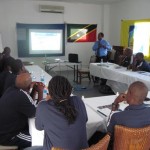 The St Kitts Nevis Football Association is once again showing their continued commitment to improving the quality of football in the Federation. On Monday 17th January the MA Referee course began in the federation. The course is a continued effort to keep the referees up to date with the constant changes to the rules and regulation of the game.

The opening ceremony was held on Monday where the Minister of Sport Glen Phillip, FIFA Instructors Ramesh Ramdhan and Peter Prendergast as well as President Anthony Johnson spoke to the referees from both St Kitts and Nevis about the importance of referee in the game.

President Johnson in his remarks outlined some of the necessary changes that have to be implemented by 1st April 2011. He stated “FIFA has made it mandatory that the Associations form a Referees Committee, the committee will be a part of the Association.” He also stated “referees are always need to be abreast with the rules of the game and also be physical fit as they are always under scrutiny.”

FIFA instructor Prendergast in his remarks stated “referees have to improve on their interpretation and application of the rules. The course this week will focus on three key elements, Technique, Interpretation and the Psychological.”

Ramesh Ramdhan told the referees, “The Referee Assistant Programmes (RAP) is geared to professionalizing the referees. We are behind in the Caribbean but in three years we have improved significantly. The future of the games lies in the hands of the referees.”

Minister Phillip in his remarks commended the SKNFA for the training that they have started in the beginning of the year. He said “the SKNFA is leading the way as this is the second course started within days. I recently spoke on Saturday at a Women’s Technical Course and today I am now at another opening ceremony for a referee training course.”

Minister Phillip also stated that he will be looking into ensuring that the equipment that are used for these courses are not charged any taxes as it has become a burden on the Association.

The MA Referee Course will end on Friday 21 January, and the referees will be engaged in theory and practical session. They will also be conducting a fitness test during the course.