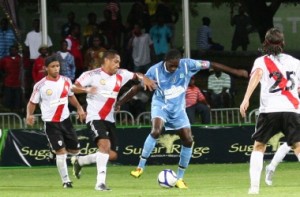 ST. JOHN’S, Antigua – A wonder strike from St Kitts International Orlando Mitchum made the difference in the second USL PRO encounter of the weekend between River Plate Puerto Rico and Antigua Barracuda FC, giving Antigua a 1-0 victory at the Sticky Wicket Stadium on Sunday night.

Preceded by a brilliant run and shot in the box by Tamarley Thomas and an effective save by River Plate goalkeeper Craig Hill, the ball rebounded into the path of the impressive Mitchum who fired from just outside the box to raise the roof as the home side took the lead in the 23rd minute.

“I can’t tell you enough how much I enjoyed that strike,” Mitchum said. “I’ve been unlucky not to have a few more goals to my name, but this makes up for those I should have put away. What makes it more special is that is gave my team a deserving win.“

The home team employed its energetic and fast pace approach form the first whistle. But in the ninth minute, inspirational leader and captain of the team George Dublin was substituted with a suspected knee injury. Knowing the importance of Dublin to the team, this was not good news.

However that seemed to give added impetus to the ‘Cudas and Thomas and Mitchum were particularly threatening as their runs from deep in the midfield presented serious challenges for the visitors. It was one such run that fell fortuitously for Mitchum and provided his superb finish and his second goal of the season.

As the half progressed, River began to come into its own and was able to string a series of passes together that saw them end the half perhaps with ambitions of finding an equalizer.

The resumption of the second half did see a continuation of greater possession for River Plate PR as the tired legs of the home team, having completed five games in twelve days, began to take its toll. The visitors missed the imagination and skill of Peter Villegas who sat out the entire game on a shallow bench, and with all the enterprise shown, could only account for three shots on goal, all of which Antigua goalkeeper Keita DeCastro handled with relative ease.

“We soaked up a little more pressure than we normally would tonight but it was another good test for us,” Antigua coach Tom Curtis said. “We now looking forward to a couple days off to recover as best as we can before we hit the road for a five game trip.”

Asked if he was concerned about the injury to his Captain George Dublin, Curtis added, “George is important to our team but he will have a scan tomorrow and hopefully it’s not too bad. We will wait and see.”

With 18 points from eight matches and the lead in the USL PRO International Division leaders after an impressive winning streak of six matches, the team leaves the island on Wednesday for a five-game road trip beginning Thursday against Puerto Rico United.