Fans took to the Warner Park Football Stadium last night for an evening of exciting football. In the first matchup St. Thomas-Trinity Strikers met up with Delphic Newtown United in an attempt to pull themselves out of the relegation zone. The game began at 6:00 p.m. and by the 11th minute Ian ‘Rumpy’ Lake had put in Newtown’s first goal.

By the end of the first half no one had scored any more goals and the teams left for the dressing room. At the beginning of the second half, Strikers came back with numerous chances to score but were not able to put the ball in the back of the net. In the 73rd minute Zevon Archibald secured Newtown’s lead and there was no coming back for Strikers. The game ended 2-0 in favour of Delphic Newtown United.

In the next game UDC Garden Hotspurs came up against S.L.Horsford’s St. Pauls in an effort to take revenge for the loss they suffered during the Easter Cup.

In the 25th minute George “Yellowman” Isaac controlled the ball on his chest and fired a beautiful volley toward Zelon Morton (Spur’s goalkeeper) who just could not do anything to prevent it from hitting the net. What a way to score his first goal of the year. UDC Garden Hotspurs were wild for retaliation against their former coach and his team, but St. Paul’s defenders prevented them from penetrating their line of defense. 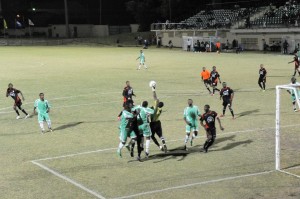 The halftime whistle went and the teams left the field to regroup and prepare themselves for the second half. Ten minutes into the second half it was Rasheed Hodge with a sweet strike from the edge of the six year box to seal the deal for St. Pauls. There would be no more goals in this game despite numerous attempts from both teams.

At the end of last night’s games the Point Standing is as follows: