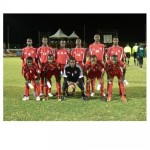 Newtown United will be hosting the professional team Caledonia AIA of Trinidad & Tobago in the Caribbean Football Union Club Championship on March 10th 2011 in St Kitts with an 8:00pm kick off time. Newtown United is the current champions of the St Kitts Nevis Football Association which qualified the team to participate in the Caribbean Club Football tournament. This will be the first time in several years that a club from St Kitts and Nevis will be competing in the new tournament format.

The tournament is scheduled to begin on March 9th and continues until the Finals in Trinidad and Tobago on May 29th 2011. The teams will play a home and away game over the period with matches scheduled on selected weekends.

Newtown United will travel to Trinidad and Tobago during the weekend of 18-20th March for the away game. The exact date has not been determined for the match in Trinidad & Tobago.

Source: Wikepedia.com
CFU Club Championship
The CFU Club Championship is the annual international football competition held amongst association football clubs from the Caribbean Islands for clubs that are members of the Caribbean Football Union.
The Competition was founded in 1997 and has been won by Jamaica, Trinidad and Tobago and Puerto Rico.
The Competition is open to the leading domestic club teams in the region. The winners of each national league qualify automatically. Many member countries do not send a representative team. The winner of this competition as well as the first and second runners-up will advance to the CONCACAF Champions League in the preliminary round.