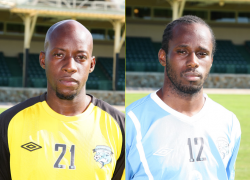 Antigua Barracuda FC
United Soccer Leagues announced the USL PRO Team of the Week for Week 6 of the 2011 season today, honoring Orlando City forward Max Griffin as Player of the Week after he scored the game-winning goal in the Lions’ 1-0 victory against Dayton on Saturday night.

Griffin has been named twice to the USL PRO Team of the Week already this season, and is now tied for the league-lead in goals with Richmond’s Matt Delicâte, who was also named to the team after his game-winning goal in the Kickers’ 2-1 comeback victory against the Wilmington Hammerheads.

Griffin’s Orlando City teammate Jamie Watson was also named to the team for a strong midfield performance that saw him provide the assist to Griffin for his goal. The victory moved the Lions into second place in the USL PRO American Division as they prepare to host the Pittsburgh Riverhounds this Saturday.

Antigua Barracuda FC’s goalkeeper Keita DeCastro was named to the team for the second consecutive week after posting another pair of shutouts in the past week. Since being introduced to the starting line-up two weeks ago, DeCastro has yet to concede a goal, giving him a 450-minute shutout streak.

DeCastro is joined on the team by midfielder Orlando Mitchum, who had a game-winning goal and an assist in a pair of games last week as Antigua extended its winning streak to six games. Rochester’s Tony Donatelli joins Mitchum in the team’s midfield after his goal provided the Rhinos with victory in their home opener for the first time since 2004.

Richmond’s Delicâte was joined on the team by midfielder Gerson dos Santos, who had the equalizer in the Kickers’ rally, while Wilmington’s Ivan Becerra was named for the second consecutive week after his goal gave the Hammerheads an early lead at City Stadium.

USL
PRO Team of the Week