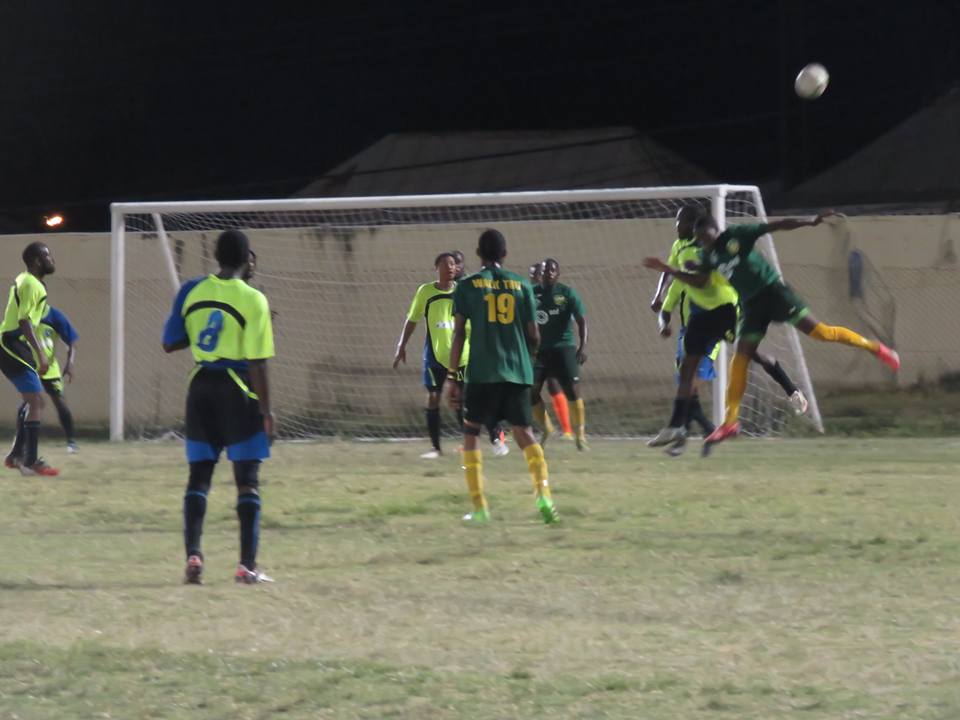 Basseterre, St. Kitts, 5th May, 2016 – The SKNFA Premiere League is in its final stage of the third round of matches, with all teams having played 24 games, with a remaining three games for each team.

According to Dexter Tyrell of the St. Kitts and Nevis Football Association (SKNFA), Winners Circle Newtown United has already secured its spot in the Final Four. He said, “What we are seeing here is three spots remaining and four teams contesting for those three spots.”

These competing teams are H E Garden Hotspurs, FLOW 4G Cayon Rockets, S. L. Horsford St. Paul’s and SOL Island Auto Conaree FC. St. Paul’s is the defending champion and will be playing to ensure the team enters the Final Four. All of these teams have three remaining matches.

Interestingly, the Premier League matches are being moved from the Warner Park Football Stadium to the Kim Collins Athletics Stadium starting this weekend (May 7).  Tyrell explained, “The reason we’re making the move from the Warner Park Football Stadium is because there is a need for the ground to get some rest and to do some refurbishment to the field, which we have already started.”

On Saturday, May 7, at 5:30 p.m., Winners Circle Newtown United will play Rivers of Living Water. At 8 p.m., H E Garden Hotspurs come up against S. L. Horsford St. Paul’s in the marque game of the night. Spurs being on 42 points will need a win to maintain their push to get into the Final Four. S. L. Horsford St. Paul’s is on 43 points and cannot afford to be defeated.

On Sunday, at 3 p.m., SOL Island Auto Conaree FC clash with Bath United. At 4 p.m., FLOW 4G Cayon Rockets will play Fast Cash SPD United. Both teams need to win, but S P United has gone through a series of losses and must redeem themselves. At 7 p.m., Elco St. Peter’s has an encounter with Rams Village Superstars, and while these two teams are tied on points, 34 points each, both will be jockeying for a higher position on the points-table. The last time both teams played to a draw, and each will be looking for a result in their favour.

Other matches to be played at the Kim Collins Athletics Stadium on Tuesday, May 10, will be Rivers vs St. Peter’s and Superstars vs Hotspurs. Wednesday, Bath United will play Cayon Rockets. The last match on that date will be the Number 1 Seed, Newtown, will take on Conaree. This is expected to be a tough match, as the two top teams in the present standing have intentions to outscore each other. On May 12, St Paul’s takes on S P United, this game being played at the St. Paul’s Recreation Ground, with St. Paul’s attempting to make their spot secure in the Final Four.

On May 14 and 15, the last matches of the third round of the Premier League will be played. On the 14th, 5:30 p.m., Superstars will come up against Rivers, and at 8 p.m., St. Peter’s will play Conaree. Sunday’s games begin at 4 p.m., with St. Paul’s play Bath United. At 6 p.m., Hotspurs play against SPD United. The final game of the Premier League, 2015 – 2016, will start at 8 p.m., with Cayon Rockets coming up against Newtown United. According to the SKNFA, these games are likely to be played at the Warner Park Football Stadium once the playing surface is ready.

Tyrell extended appreciation to all the sponsors, Ministry of Sports and all other stakeholders for making the 2015 – 2016 SKNFA Premier League possible. He said, “We just want to say a big thank you to all the sponsors who came onboard for the 2015 – 2016 Premier League. I am certain, come Final Four, we will see a very high standard of football.”

As the League enters its final round of matches, the General Secretary of the St. Kitts-Nevis Football Association (SKNFA) believes the excitement among fans is building nicely. He said, “We anticipate keen competition, as the teams try to be among the Final Four. ”

The league is generating much interest in the competition. Jacobs said, “Crowd attendance has improved over the year. Ongoing interaction with the media and the new live TV broadcast on Saturday nights have all helped to create the buzz.”

In addition, Jacobs believes that the good performances being exhibited by the senior men’s team is also helping to create interest and improved attendance at football matches.

He encouraged everyone to come out and support his or her team in the Premier League and those that enter the Final Four.