For those who lost count of the point standings for the Premier Division we are providing an update for you. Over the weekend four Premier League games were played. On Saturday, St. Thomas Trinity Strikers and UDC Garden Hotspurs played to a nil nil draw while Conaree defeated RAMS Village Superstars three goals to two.

On Sunday, S.L.Horsford’s St. Pauls United came up against Cayon and Cayon lost that battle. St. Pauls was able to score four goals as opposed to Cayon’s one goal. Then Harris Pant St. Peters came up against Delphic Newtown United and Newtown took three clear points from this game after scoring four goals when St. Peters had only scored one.

The point standing for the SKNFA Premier League is as follows: 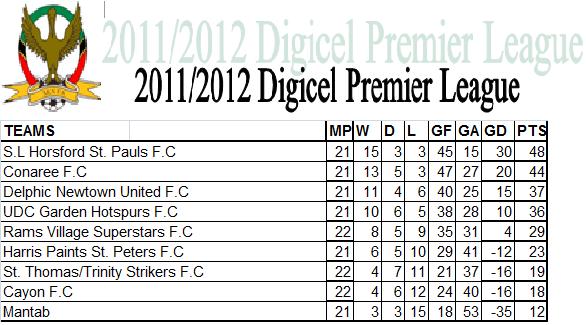 The total number of games to be played is twenty-four which means that the end is drawing nigh and the final four teams will soon be decided.