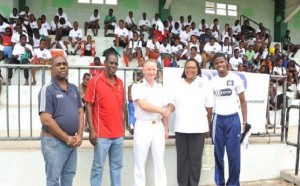 BASSETERRE ST. Kitts, September 24th, 2012 — During our week of Independence and Heroes day celebrations, September 17th -19th, Pro-Active Soccer School (PASS) in collaboration with the British High Commission and the St Kitts and Nevis Football Association (SKNFA) launched its Youth Football and Life Skills Project, at the Gardens Football Field. The management of PASS saw it fitting to give birth to the Academy during this week of celebrations, paying tribute to those who have made significant contributions to the advancement of St Kitts and Nevis.

The opening event was the official launch of PASS Academy succeeded by a 5v5 Youth Football Festival for players in the Under-14 and Under-16 categories. Subsequently, during the month of October 2012, PASS and the SKNFA will collaborate to deliver the Life Skills Curriculum to the Youth Coaches of its member clubs, focusing on topics such as Confidence, Self Esteem, Manners and Etiquette, Communication, Managing Relationships and Conflict Resolution.

Anthony Johnson, President of the SKNFA, and President of SKNOC, Alphonso Bridgewater, in addressing the attendees at the launch, spoke of the sporting heroes and athletes of St Kitts-Nevis who came through initiates of this nature from the grassroots to regional and international recognition.

The representative for the British High Commission, Captain Gerard Patterson of the RFA Argus the Royal Navy ship, complimented the organisers and partners on the project’s objective- to impart life skills to the at-risk youth footballers. He expressed great satisfaction towards the British High Commission’s role in funding this project under the Olympic Trust and conveyed hearty congratulations for the great performance by our Caribbean athletes at the recently held 2012 London Olympic Games.

Opening the 5v5 Youth Football Festival was an exhibition game, played between the Royal Naval Officers of the RFA Argus and the Youth Coaches/National U17 selected team. The matched ended 4-1 to the RFA Argus team.