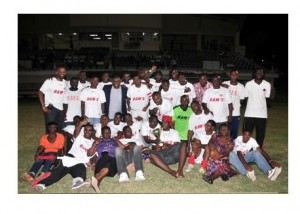 The second round Easter Cup lived up to its expectations over the Easter Weekend. The four top teams S L Horsford St Pauls, Conaree, Rams Village Superstars and Delphic Newtown United competed for the second round cup.

Rams Village Superstar was the newcomer in the top teams for the cup as all the other teams were in the Carnival Cup at the end of the first round. The teams were seeded with the number one team playing number four and two playing the number three team. For the new comers they would face the Champions of the first round Conaree. Rams Village superstars would have to prove in the first game that they deserve to be in the tournament by knocking off the ever popular Conaree who are known for winning these tournaments.

Rams Village Superstar would prove their dominance and defeat Conaree in the first game 2-0 securing their spot in the finals. In the second match S L Horsford defeated Delphic Newtown 4-2 in penalty winning the second spot in the Finals. Conaree and St Pauls would play for the third and fourth spots.

The third round of play are in full swing and the top four teams will be determined by the overall Points standings. St Pauls have retained their top spot with Delphic Newtown close behind.

The final four in June will be an exciting matchup as the number one team S L Horsford St Pauls has not won any of the small competitions and the other teams have their sights set on dethroning Delphic Newtown.