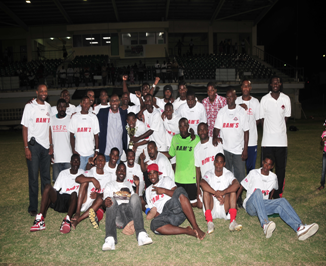 Rams Village Superstars did not have an easy task in reaching the Finals of the FA Cup. During the quarter finals they played the current Premier champions the Delphic Newtown United of which they came out the winner in that matchup. They then were drawn to play S L Horsford’s St Pauls for the semi finals match. The match ended with both teams scoreless after regulation time and went to penalty kicks to attain a winner of the match. After great shots and not so great shots to both goal keepers Rams Village Superstars won the penalty kick-off to go to the finals on Wednesday.

Earlier in the afternoon Mantab and Cayon FC both played for their spot in the Finals, and Mantab scored in the first half. That goal would be the deciding goal of the game. Cayon who before the game had not lost or draw a match in their Division, were confident at the beginning of the game and that they could win the encounter. Mantab however, were able to keep Cayon off of their game and at the end of the match Cayon seem deflated. The loss for Cayon was not only their first loss of the season but also they loss the opportunity for a Premier and Division 1 team in the FA Cup Finals.

The FA Knockout Cup is a tournament where all registered teams in Premier and Division 1 compete with each other in a knock out situation. This gives all teams a chance to play each other in some very exciting games.