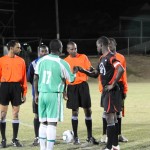 After suffering a 2-0 defeat in the Easter Cup Semi-finals, UDC Garden Hotspurs will once again come up against S.L.Horsford’s St. Pauls. Spurs will be looking to take revenge against their former coach as they prepare to secure a spot in the Whit Cup.The Whit Cup will be played among the four teams amassing the most points during the third round of the league.

This is the first ever Whit Cup and all Premier Teams are gunning for the shot to be the first ever holder of this cup. Spurs and St. Pauls face off tomorrow at the Warner Park Stadium at 8:00 p.m. St. Thomas Trinity Strikers will be coming up against Delphic Newtown United at 6:00 p.m.