Basseterre,St. Kitts- After an action packed weekend, the football fraternity are now more certain of the top teams vying for the coveted Final Four spots. The Final Four Competition has always been the local competition that fans, players and coaches alike look forward to at the beginning of the season.

After Saturday’s defeat over Cayon, Rams Village Superstars remain contenders for one of four spots. A warning was sent to the other four teams vying for spot when Village found the back of the net a whopping seven(7) times. Not only did Village manage to outscore Cayon, they also managed to play a card-less match which means all players are eligible to play their next match.

Delphic Newtown United was definitely hoping to steal three points from Conaree on Saturday but only managed to get one, leaving Conaree with the other. Both teams are still however hoping to advance to the playoffs.

Sunday’s first matchup saw Mantab and St. Thomas Trinity Strikers engaging in fierce competition but just like the last matchup on Saturday, neither managed to outscore the other, hence only one point was afforded to each.

The last game of the weekend saw Final Four hopefuls S L Horsford St. Pauls coming up against Harris Paint St. Peters. St. Pauls, who needed the win to stay in the race convinced the fans they deserved to have a spot. Four goals to one was the final score and St. Pauls hold steady in fourth position.

With only six matches remaining in the season, each team must take each opportunity to gain maximum points in order to advance, the remaining matches are as follows: 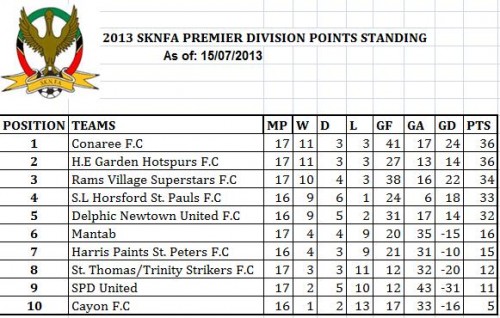 WHO WILL IT BE?