Third Place or Fourth?
Amazing, thrilling, astonishing, remarkable and incredible are words simply too bland to describe what took place at the Warner Park Football stadium last evening(8th April). The crowd began to gather early to set the mood for the first game. Spartan’s fans held their ground on the northern area and prepared for battle one last time as Conaree prepared to take on UDC Garden Hotspurs. The Spurs fans did not abandon their team either, they set up camp on the Eastern bleachers in hopes of claiming third place.

A quick start from Shervin Allen in only twelve (12) minutes of play saw Spurs reaching for bronze over the heads of Conaree. Three minutes later, the war hungry Spartans replied with Byon Morson’s attack that only ended when the ball was at the back of the net. Morson was not done however, and the entire game flipped one hundred and eighty (180) degrees with his second goal of the night before the halftime whistle went. Spartans’ fans erupted into celebration as hope came alive for that third place spot. 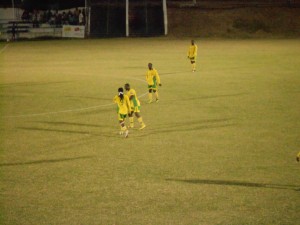 At the start of the second half it was only obvious that Spurs were not going down without a fight. The young Spartan captain would not tolerate a comeback however, and in the sixty-third(63rd) minute he beat the Spurs goalkeeper and the ball settled at the back of the net once again. Conaree were now leading by two goals as the scoreline held fast at 3-1. In the ninetieth minute however, just before the end of the game, Conaree’s Delroy Delaney, who has not played anywhere except in the goal since the start of the 2011-2012 league scored his first goal. What a celebration that was! Conaree had shattered Spur’s hopes of third place and could boast of their Easter Cup achievements. 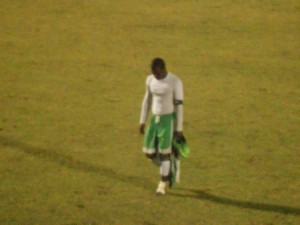 The Championship Matchup
As more fans poured into the Stadium, the anxiety could be felt in the air as they themselves prepared for the challenge ahead. The title holders were coming up against the league leaders and everyone was aware that this would be no simple match-up. RAMS Village Superstars and S.L.Horsford’s St.Pauls were ready to face off both on the fields and around the stadium.

Right away, the game exploded into fireworks. Just seven minutes in and Josh Leader was ready to claim the title, S.L.Horsford’s had scored their first goal. Of course the crowd reacted with cheers and jeers and the atmosphere grew even more exciting. Those guys on the field played as though losing would mean be death of them. In the thirty-third(33) Village’s number thirty-three (33), Travis Somersall gave a golden strike which Jamal Francis, St.Pauls’s goalkeeper just could not stop. The game was now tied and remained that way until the end of the half came. 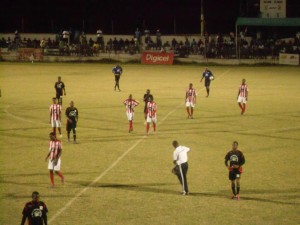 The tension just kept building all throughout the second half, no team was ready to accept defeat. They played a full forty-eight(48) minutes without another goal scoring which meant the game would have to go into overtime. As the first half of overtime progressed, the players showed no signs of fatigue nor did they show their battle scars. Their pace did not decrease, their tackles did not decrease, their skills showed no signs of deterioration, all they showed was their passion.

The first fifteen minutes of extra time had elapsed and the final fifteen began. The game was keenly contested and it seemed as if this one would have to be decided through penalty kicks. With one more minute left in the game, it was S.L.Horsford’s number fourteen(14) Javeim Blanchette to throw the final punch with a magnificent strike from far out to seal the fate of every player on that field. There was not a closed mouth in the stadium after that, whether it had been of shock or excitement, there was a reaction. St. Pauls’ fans went wild and Village’s fans hung their heads as they knew that their reign had come to an end. 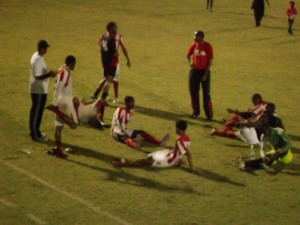 There was a new SKNFA Easter Cup Champion for the 2011-2012 Premier League, S.L.Horsford’s St. Pauls. None could argue that a strike like that deserved to be a title winner, and so it was. The SKNFA wishes to thank everyone for their support: fans, players, clubs, sponsors and everyone else. This year’s Easter Cup was truly one to remember, and so we shall. Congratulations to S.L.Horsfor’d St. Pauls on their new title and also to RAMS Village Superstars who never gave up on what they wanted. 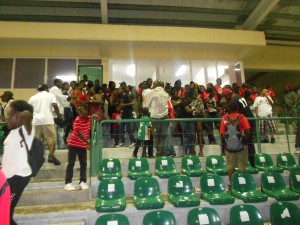