Source: Virgin Island New Online-Road Town, Tortola, BVI- The BVI lost 2-0 to Anguilla last night, Tuesday July 16, 2013 as both teams opened their Caribbean Football Union/FIFA Women’s U20 qualifying Tournament campaigns on the A O Shirley Ground.
Having withstood some early pressure, the BVI’s defense was split open in the 10th minute by a pass from midfield that Roxanna Bradshaw latched onto, controlled and then took a touch before sliding it home past the diving Brittany Peters in goal.

Ebony Fahie, battling away in midfield, launched the first home attack with a ball that was played over the top, a tactic that was used too often during the game and with too little success. On this occasion and with legs still fresh, Kezia Gumbs chased it down, slipped past a couple of defenders and with the small crowd leaping to their feet in expectation was unfortunately only able to hit her cross at the keeper.

Most of the first half action though was in front of the host’s goal and thankfully Peters was in good shot stopping mode and had Tahirah Bascombe with Joi Ann Thomas playing solid in defense to back her up.

The BVI’s most successful passage of play came deep in the first period when a series of corners and throw ins had Anguilla scrambling more than once, but the final ball was lacking and the lines were cleared.

The second half was much the same as the first with Anguilla looking the more likely to score and so it proved when Tamisha Richardson slipped through the defense. Her first shot was well saved by Peters, but the rebound fell kindly for the striker and she made no mistake second time around.

Anguilla could have and probably should have scored a few more goals in truth, but at the final whistle, the BVI Coach Kate Rowson could at least take some positives from the game whilst having much to improve upon.

“The result hasn’t gone our way, but I have to say there were some really disappointing bits, especially with the basics, but also I’m pleased with the effort, the organization and the positions, but don’t get me wrong, we have lots to work on and two tough games coming up,” Rowson said.

Coach Kate wouldn’t be drawn on the “over the top” tactic as opposed to playing on the ground, but did comment that it would be discussed. Additionally she pointed out that “we need to look at the game. We didn’t make enough passes or have enough play making. We were trying to play the ball in the air which was the reason why we didn’t put together the passes and we need to sort that out.”

The day’s first game had seen St Kitts and Nevis beat Antigua 4-0 with the Girls red putting on a classy show especially when the ball was at the feet of Phoenetia Browne down the right hand side or Brittany Lawrence down the left.

It took Browne just 4 minutes to supply the cross that unlocked the Antigua defense. Her ball evading two Antigua defenders and finding its way to Janae Pine, who took a touch and calmly slotted home past Mahiah Benta in the goal.

Several half chances went begging at either end, but then on 36 minutes, a delightful corner from Lawrence was met by Kerisha Powell and the lead was doubled.

In the second half Lawrence and Browne were pulling Antigua all over the field. Powell went narrowly wide with a header, Pine just failed to get a touch on a Lawrence cross and then Powell had the best chance to make it 3 when she followed up on a free kick from Lawrence which bounced over the keepers head and then back of the post, but the striker failed to get a clean strike on the ball and instead found herself in the back of the net.

Pine eventually made it 3 in the 75th minute and then to cap off a great all round performance Lawrence slotted home from the penalty spot to make it 4 -0.

Below are the results of both matches: 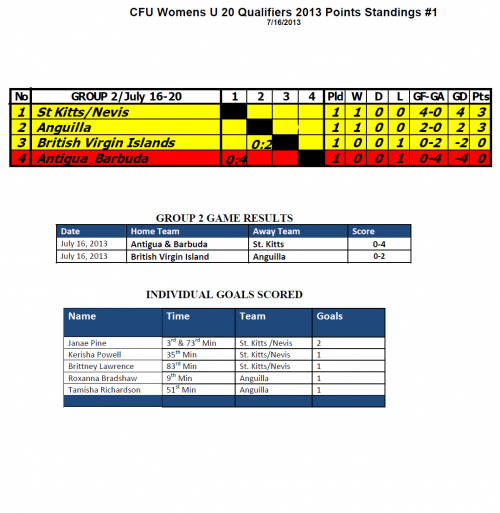