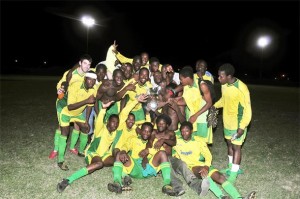 The 7 vs. 7 Tournament that was held over the weekend by the St Kitts Nevis Football Association was a tremendous success. The Tournament was held over two days and saw twenty-eight teams from both the Premier and Division 1 scheduled to compete for the championship.

During the Semi Finals Village Superstars Jrs upset Mantab by winning 1-0 to advance to the finals. This game proved that the Division 1 teams were playing to win the championship and would not be outdone by the Premier teams. The second semifinals game resulted in Coury Gatorade Conaree defeating Cayon 1-0 advancing to the finals.

Coury Gatorade Conaree has won all three of the small tournament held this year. They won the Sugar Mas Cup in December, The 5 Vs 5 in January and now the 7 vs 7 over the weekend.

The event accomplished its goal by having teams playing a different format of the game, being ableto make decision faster and accuracy at shooting goal.

The tournament was well attended by the Saddlers and surrounding communities and the St Kitts Nevis Football Association would like to thank White Gate Development Corporation, Digicel and all the persons who contributed to the tournament.