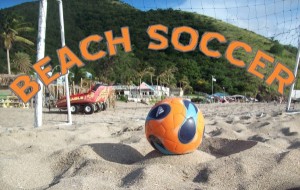 The SKNFA in its continued efforts to bring new and exciting football to the Federation has set a plan in motion to bring a new form of football to St Kitts. The SKNFA has invested in the Beach Soccer program by sending three representatives to a Beach Soccer seminar in October in the Bahamas. The two day Seminar was an introduction to the sport that has been played worldwide but has now recently hit the shores of the Caribbean. The representatives of the Seminar learned about coaching, refereeing and the marketing and Administration of the fast growing sport. 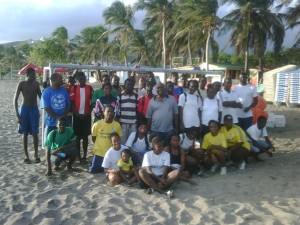 The SKNFA has now formed a Beach Soccer Committee who will be dedicated to the implementation and introduction of the sport in the Federation. The Committee has been working diligently and recently hosted a workshop on Saturday 27th November 2010. The workshop was well attended by young enthusiastic participants from the U-20 girls and U-15 boys who were ready to take on the challenge of the new game.

The workshop began with an introduction to the games, its rules and regulations. Some of the participants were also introduce to the referee aspect of the game. 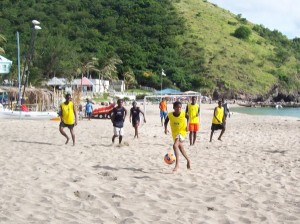 The participants then began the practical, where they were placed on teams and played a series of games. This exercise proved to be the most exciting and enjoyed aspect of the day as the young and skillful athletes learned the rules of the game while having fun.

The day ended with a few words from the SKNFA president Anthony Johnson. Mr. Johnson spoke of the need for new game. He stated “Beach Soccer is a game that can provide more opportunity for the youth; it is less expensive and can give the participants more exposure to the outside world.”

Lenny Lake Technical Director for the SKNFA spoke to the participant, he explained, “Beach soccer is a game that is played in regions that do not have a beach. It is easy to play with less expense on the participants and the organization. 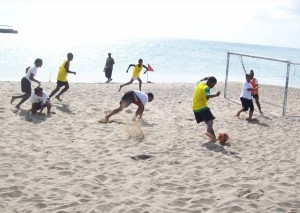 It is a sport that can be played anywhere in the world. It requires less and can be played by anyone at any age group.” He further explained to the participant that the game importance and future of the sport in the federation. “The game also has its own World Cup and unlike the traditional game a World Cup can he hosted by a small nation such as St Kitts and Nevis. Therefore our goal is to start aiming for first qualifying for the next Beach Soccer World Cup and eventually hosting a World Cup.”

The SKNFA has rolled out plan for Beach Soccer which will begin with a Beach Soccer High School Festival Scheduled for 9th December. The full launch of the programme will be in January 2011 where clubs and other organization will have a chance to participate and learn the game. A regular league is planned for 2011 and also an International tournament will be organized during that same year. 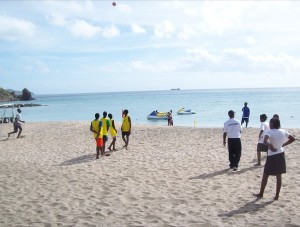 The General Public is also encouraged to support the upcoming Beach Soccer Events that will be held for. Information on SKNFA Beach Soccer can be obtained from the SKNFA Office on Lozack Road or the website www.sknfa.com and on Facebook at S.K.N.F.A Beach Soccer.