GRASSROOTS
At 9:00 a.m. the SKNFA’s weekly Grassroots Soccer Academy left Basseterre for Newton Ground to join with the kids there in a morning packed with fun and football. It must be said that these kids have improved quite a lot character-wise. While in Old Road, one bus got a puncture and the kids had to stay in the bus and wait for another to go back. The bus went quiet for a few seconds and one of our babies(a four year old) got up, clasped his hands and began to say a prayer. Though it was thought to be funny and quite random at that point in time, it was a very inspiring and touching experience. 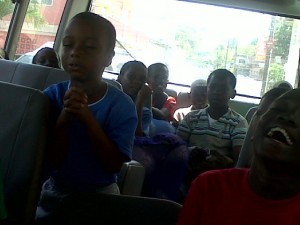 Upon arrival at the field, the boys and girls geared up and set out on their task to simply have an enjoyable day playing football and interacting with new faces. After the program was over, they had a snack and boarded the bus for home. The staff and volunteers of the SKNFA however, left for the Basseterre High school to continue the football filled day with the 5V5 Female festival.

5V5 Female Festival
The ladies finally got a chance to showcase their talents yesterday(7th April) as they commenced local competition with the 5V5 Festival. Quite a few fans appeared to cheer on the girls and they sure did not disappoint. If these girls all had shaved heads, you would not know that they were females. They played with their hearts and took blows, got battered and bruised and one even suffered a broken leg, yet they have lost no love for the game. The victim of a rough tackle, now sporting a cast while lying in a hospital bed only hours after the incident remarked, “what a way to start my vacation, but I still love the game nonetheless”. This is the fight and passion that is a burning sensation inside these young, talented ladies. The love they have for the game is unquestionably overwhelming. 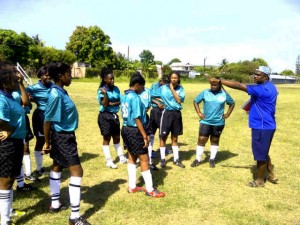 Five teams took part in the tournament and at the end, the ladies affiliated with the Village Superstars Club had accumulated the most points. They were then declared winners of the festival. The day was still not over as the Easter Cup (Day 1) was about to begin.

Easter Cup (Day 1)
I was time for the Premier games and what a massive crowd had gathered to support these teams in their quest for the Easter Cup. Ram’s Village Superstars and Conaree F.C were the first hunt on the schedule. The guys were all geared up and ready, who would advance to the final day of this egg hunt in hopes of achieving the top prize? RAMS Village Superstars(Defending Easter Cup champions) came out strong and practically bullied Conaree as the struck net not once, not twice but three times. 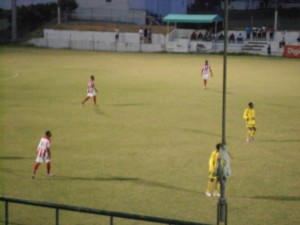 Conaree answered with one goal and then made ample attempts at more, they were however unable to capitalize on these opportunities and found themselves falling at the boots of RAMS Village Superstars. Village is one day closer to regaining their cup, while Conaree has to play for third place.

The second matchup was one that fans were very much looking forward to. Last season S.L.Horsford’s current Coach Austin”Dico” Huggins was in fact UDC Garden Hotspurs’ Coach, so of course this would be a rivalry worth watching. The game began at a pace that would have you saying no with your head on a regular basis. The ball changed ends ever so often, which was an indication that this game was going to be exhilarating. The first goal came from a magnificent strike off the boot of Javeim Blanchette to give St. Pauls the lead in the early stages of the game. It was in this same half that Blanchette was back yet again with a header that sent the St. Pauls supporters into an uproar of excitement and rightly so. The game was now Blanchette 2-UDC Garden Hotspurs 0. The intensity however, never decreased. Spurs kept on attacking, as did St. Pauls but their fate had been sealed. 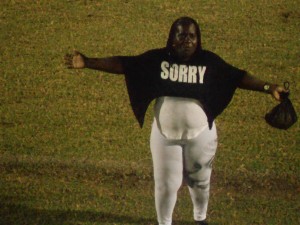 The final whistle went and S.L.Horsford’s St. Pauls could hold their heads high as they prepared to meet RAMS Village Superstars out in the fields for the final stage of the Easter Cup Egg Hunt. UDC Garden Hotspurs would have to come back the following day to try and secure third place against Conaree F.C. Third place will be no walk in the park however, as both of these teams posses the abilities, pride and determination to put on quite a show. Day 2 of the Easter Cup begins at 5:00 p.m. today at the Warner Park Footall Stadium. SEE YOU THERE!