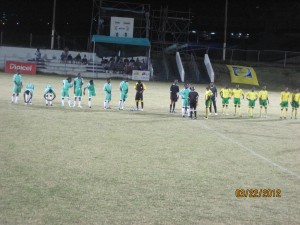 After an intriguing night of football, the points are in ladies and gentlemen! The first game featured S. L.Horsford’s St. Pauls and Mantab. Although Mantab clearly played their hearts out until the final whistle, they suffered a 6-1 defeat at the hands, or should I say the feet of the table leaders. The second game was one of great intensity as Spurs and Conaree left it all on the field, only to leave with one (1) point each. The battle however, was very keenly contested and the perseverance of both teams showed that neither was willing to leave with anything less than what they got. This brings us to the end of Round II. Here are the standings for Round II and the overall point standings to date. The Round II points decide which four teams move on to the Easter Cup and the overall points determine the Final Four teams to play for the championship.

The top four teams of the round have qualified for the Easter Cup scheduled to begin on Saturday, April 7th and runs through to Sunday, April 8th. In the first game, RAMS Village Superstars will come up against Conaree at 6: 00 p.m. In the Second game UDC Garden Hotspurs come up against S.L.Horsford’s St. Pauls at 8:00 p.m. On the Sunday the winners of the Saturday games play against each other and the losers against each other. Last year RAMS Village Superstars proved they were an unstoppable force to be reckoned with. They have qualified for the cup again but will they be able to defend their title?
The table below shows the overall points to date for all the teams of the Premier Division. Who will be the four teams to qualify for the Final Four Cup?

The teams are on a quest for the coveted SKNFA Final Four Cup, but the battle is coming to an end. There is only one more round left to be completed and a maximum of twenty-four (24) points to be gained for any team. The fight is getting even more intense but we never know what will happen in this unpredictable, beautiful game.