Referees in St. Kitts and Nevis took part in an Elite Training Course which opened on Thursday at the Kim Collins Stadium in Bird Rock. At the opening ceremony at Football House on Lozack Road, Basseterre, President of the St. Kitts and Nevis Football Association (SKNFA) Anthony Johnson, said this training was timely considering the constant evolution of the sport. He urged referees to take the course seriously. “I believe that this course is extremely timely, in that the world of football is constantly changing. The laws of the game are constantly being adopted and amended and so it’s important that the referees and refereeing officials be also kept up to date with these changes,” Johnson said. 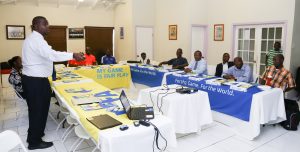 Technical instructor for the course Denmore Roberts lauded St. Kitts and Nevis for producing quality referees on the regional and global stage. He particularly spoke of the growth of female officiating worldwide and the opportunities for female referees participating in the course. “Unfortunately there is still not enough female referees to go around so some people will get a lot of work and sometimes they struggle to find females. So if you’re a young female coming up, I encourage you to take this course seriously,” Roberts declared.

The fitness instructor Kalisha Antoine was also quite pleased to see the participation of female referees in the course, which she noted was unique to St. Kitts and Nevis. “Having eight (female) participants and a few more at the back (of the room), is even more joyous to me because it’s never happened in a course and I have been doing a few courses,” Antoine said.  She stressed the importance of fitness for referees in the efficient execution of their duties. “If refereeing is what you want, you have to be committed and dedicated, not just to the tactical and technical aspect but to the fitness aspect which is probably of most importance in the field of refereeing. We are not supposed to be training to pass a test but training to refereeing games and once your training is of quality and adequate, passing a test is of ease,” Antoine added. Both male and female referees were brought through their paces as part of the course at the stadium, following the opening ceremony.