Basseterre, St. Kitts- “Where dreams are made and hearts are broken”, the slogan by which the Final Four has operated for so many years, why change it now when it is evidently still very applicable? The intensity from the last leg leading up to the Final four alone speaks to this slogan. Dreams have already been made, hearts have already been broken.

For some, it’s a treacherous time while for others, a pleasant surprise. After lagging behind all the other competitors for what seemed to be the entire season, Cayon FC pulled out two huge wins (3-1 against Harris paint St. Peters & 2 nil against Final Four team Hobson Enterprise Garden Hotspurs) in their two final matches. Not good enough was the verdict, demotion was the final call. Cayon F.c is now the team to be relegated at the start of the new season. sending St. Thomas Trinity Strikers into automatic relegation.

St. Thomas Trinity Striker’s and SPD United’s last game of the season also decided the fates for both teams. SPD, was able to conjure up a victory over St. Thomas Trinity Strikers sending Strikers plummeting into the relegation zone. SPD, the newest addition to the Premier League have secured their spot for the next season. Strikers? They must now play against the Division I playoffs winner, a victory ensures they remain a Premier team, a loss means demotion.

Speaking of early broken hearts, Delphic Newtown United’s supporters definitely fit the description. One more shot at advancing to the Final Four and they were beaten by Mantab(who sat in the relegation zone). The current Final Four champions will not have a chance at defending their title.

The final point standing for the regular season is as follows: 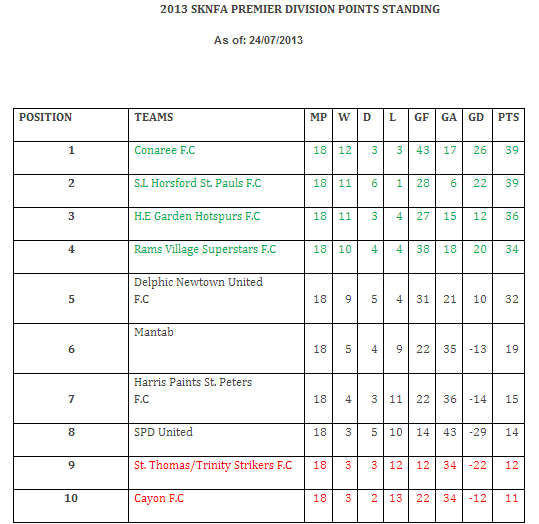 Now are you ready? Here’s the fixture for your viewing pleasure: 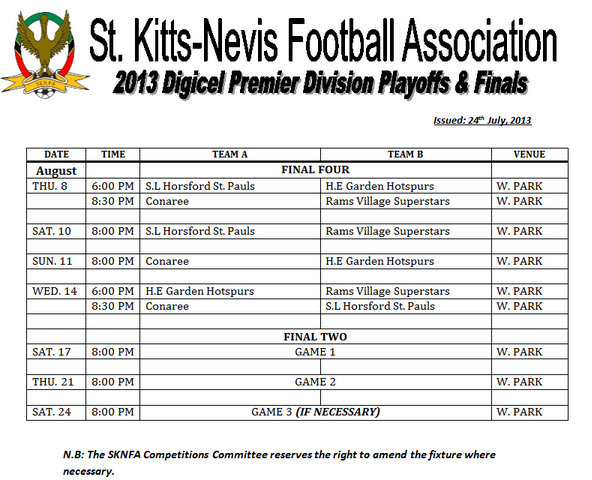 Are you ready to witness seven nights of passion, entertainment, guts, glory and excitement?

SKNFA Final Four- WHERE DREAMS ARE MADE AND HEARTS ARE BROKEN!