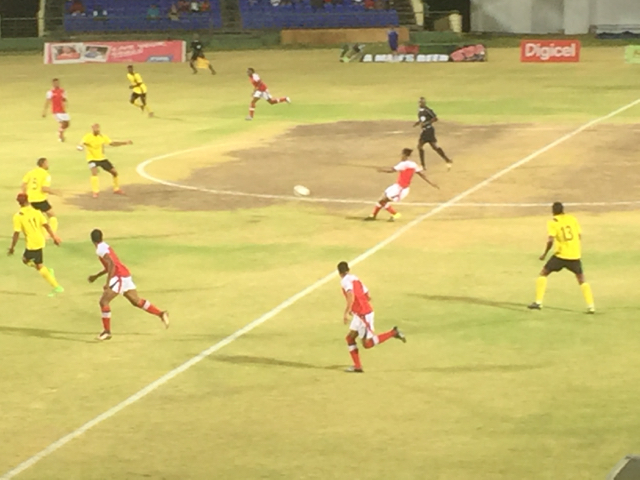 Basseterre, St. Kitts, March 30, 2016 (SKNFA) – After dispatching Antigua and Barbuda 1-0 on Tuesday night at the Warner Park Stadium, head coach of the St. Kitts and Nevis football team Jacques Passy is convinced his unit will create history in the Caribbean Cup.

Following the match, Coach Passy said, “I need to look at the opponents (in the next round) but my friend, we’re going to make history in this Caribbean Cup. What I am anticipating is to make history and go to the Gold Cup. I don’t know who will be our opponents, but I’m pretty happy with the team.”

The St. Kitts and Nevis Senior Men’s National Team made a clean sweep of the Caribbean Football Union (CFU) Caribbean Cup qualifying round one defeating both Aruba (2-0) and Antigua and Barbuda without conceding a goal. Coach Passy said after the match Tuesday night that the fact that they have kept clean sheets in the competition thus far is a sign of their intent and also that the team is building camaraderie.

Passy stated, “We’re becoming much more balanced. We’re becoming a team that trusts each other very much. So defensively I was very happy.” He said the team created more chances to score up to five goals, and he wasn’t completely happy with not converting those chances. “We weren’t very sharp on attacking. I need to address that issue, but I think we played a very fair game,” he said.

The first half started a bit flat for both teams though St. Kitts and Nevis had some good chances but failed to put them away. However, Coach Passy said his strategy in the first half worked well and paved the way for a more intense second half. Passy said, “We wanted to work the game the first half and put Antigua in the position in which we wanted them to play and that’s exactly what we did.”

Both Antigua and St. Kitts had already qualified for the next round of matches even before they both played in Tuesday’s match having both defeated Aruba. However, St. Kitts-Nevis winning last night’s match placed them at the top of the group.

no images were found