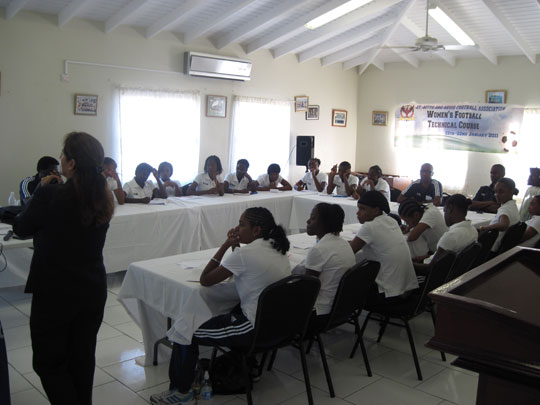 Minister Phillip spoke to the participant and congratulated them on participating in such as important event. He indicated that more women are involved in sports and that the government is committed to supporting these programmes.

Minister Liburd also spoke at the event and encouraged the young women to have respect for themselves, the game and for their country. Minister Liburd stated “that when women are involved in anything whether it is sport or work they bring about change. So I am imploring you the future leaders of women’s football to take the challenge and learn as much as you can.”

The course will continue throughout the week with theory and practical sessions. The course will end on Saturday 22nd January with a football festival at the Newtown Playing field. The participants will be able to display what have been taught to them during the week long training session.

The St Kitts Nevis Association has plans in place to start an official Women’s League in the federation in 2011. The women will also start training for the upcoming Olympic Qualifiers scheduled for sometime this year. Plans are also in place for them to travel to Anguilla for an International Friendly match.