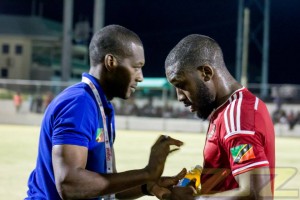 The Sugar Boys got onto the score card first when the captain Atiba Harris found the back of the net in the 18th minute of play. Four minutes later, TCI’s Billy Forbes responded with a goal making the score even. With two minutes of regular time in the first half, the Sugar Boys were able to score two goals compliments Thriven Leader and Orlando Mitchum respectively. Thrizen also scored an own goal which not prove detrimental at this stage of the match. Orlando would then come back to score his final goal in the dying moments of the game (the 90th minute).
Tishan Hanley scored in the 68th minute and Errol O’loughlin in the 85th minute of play.

The full time score for this matchup was SKN 6-2 TCI. The teams will meet once more on Thursday, 26th Marc . This time on the home turf of Turks and Caicos at 7:00 p.m. 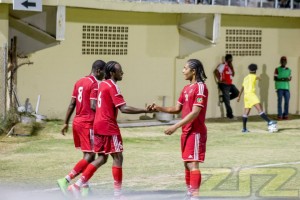 We wish the Sugar Boys all the best as they seek to surpass this hurdle on the road to Russia 2018.