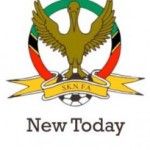 The tournament is being held in order for countries to qualify for the 2012 Summer Olympics in England. The tournament is unique as there is a specific age group for players. The players have to be born 1st January 1989 or later.