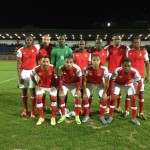 Once again the Sugar Boyz will be coming up against the Grenada Spice Boyz. This time it will be in a friendly match up on Sunday 27th March at 8 pm at Warner Park Football Stadium. The St Kitts Nevis Sugar Boyz who competed against the Grenada Spice Boyz last year in the Digicel Caribbean Cup lost the game 2-0 and they would be trying to redeem themselves on home soil. Although the game is just a friendly match it will be one than can send waves throughout the Caribbean and the World.

Grenada is currently ranked third (3rd) in the Caribbean and 94th in the World and is preparing for the CONCACAF Goal Cup later this year. Matches that are played against highly ranked teams are keenly watched throughout the region. The St Kitts Nevis Sugar Boyz who competed against the Grenada Spice Boyz last year in the Digicel Caribbean Cup lost the game 2-0 and they would be definitely trying to redeem themselves on home soil.

The St Kitts Nevis National Senior team has been practicing for several weeks and during this week, practices have intensified. The home team will have a difficult match ahead of them but the stakes are high for both teams.

Grenada was the only OECS country to make it to the final four of the Digicel Caribbean Cup and propelled them to below 100 in the World ranking ahead of Trinidad and Tobago. The tournament also awarded them a place in the Goal Cup. A defeat to St Kitts would be a blow to the confidence of the team

St Kitts Nevis will travel to Grenada for a return match scheduled for April 2, 2011. Therefore it is very important for the home team to win the match on Sunday.